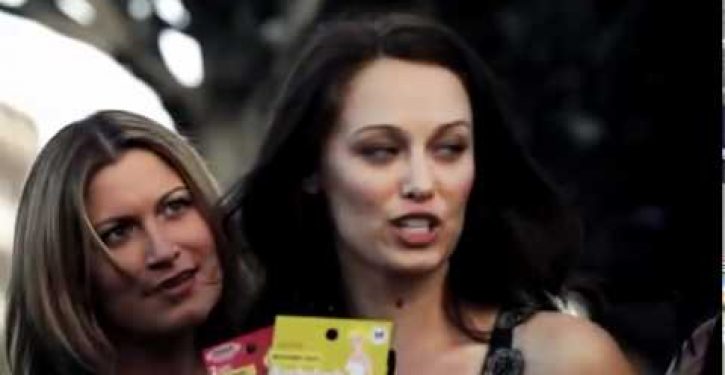 “I’ll have what she’s having.” That iconic line from the film “When Harry Met Sally” is uttered by a female customer at Katz’s Deli in New York after Meg Ryan demonstrates how easily women can fake orgasm. Now another New York woman is suing because she didn’t have what the women in a web video advertisement appear to be having.

Meng Wang, of Queens, is suing Gildan Outerwear, a Canadian-based clothing company, because their product, Kushyfoot, didn’t bring her to sexual climax as she walked down the street.

And the delightfully named Wang is not alone. She is the lead complainant in class action suit filed Monday in Brooklyn federal court. According to the New York Post:

[The] suit [claims] that she was duped into believing she’d get some good vibrations from the pair of black “shaping tights” she bought at an Elmhurst Duane Reade for $7.64 after seeing an ad for the Kushyfoot product.

The Web ad features a woman sashaying around in the Canadian company’s hose cooing “highly sexually charged phrases’’ such as, “That’s the spot!” and “Oooh, yes!’’ while background singers croon “I feel super satisfied, super satisfied!,’’ the suit says.

There article notes that the class includes more than 100 plaintiffs, who have collectively spent more than $5 million on Kushyfoot. The Daily Mail adds that Wang et al are seeking “redress for deceptive and otherwise improper business practices.” Whether these women expected to orgasm while walking down the street, as the ad portrays, remains to be seen, but with the very public obsession nowadays with female sexual gratification, it should surprise no one if they did.

A tale of three idiots: Cop shoots off his own finger, sues gun store (Video)
Next Post
Cartoon of the Day: Busy signal