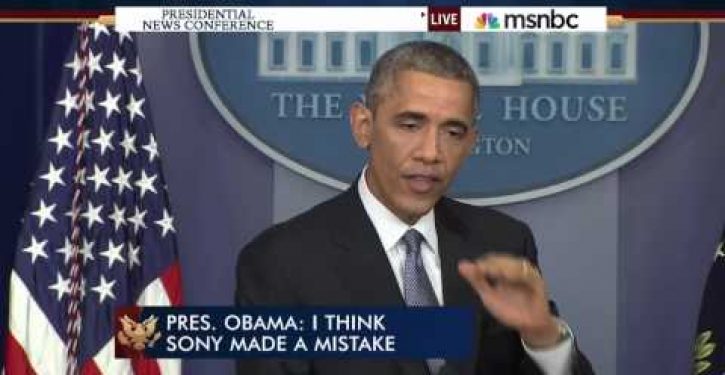 President Barack Obama championed the First Amendment freedom of speech at a press conference Friday as it related to an anti-North Korean film, but two years ago his administration tried to censor a YouTube video critical of Islam.

During his last press conference of the year, the president was critical of Sony Pictures’ recent decision to pull its film, The Interview, which mocks North Korea, from theaters. He based his opinion on First Amendment grounds, as reported by The Washington Free Beacon.

“Even worse, imagine if producers and distributors and others start engaging in self-censorship because they don’t want to offend the sensibilities of somebody whose sensibilities probably need to be offended.”

Flash back to two years ago, when the administration attempted to blame the Sept. 11, 2012, Benghazi attack on a YouTube video that was critical of Islam.

Appearing on Late Night with David Letterman exactly one week after Benghazi, Obama insisted that the video was what prompted the attack even though by that time the YouTube video narrative was beginning to unravel.

Here’s the exchange, according to Real Clear Politics.

LETTERMAN: Now, I don’t understand, um, the ambassador to Libya killed in an attack on the consulate in Benghazi. Is this an act of war? Are we at war now? What happens here?

OBAMA: Here’s what happened. … You had a video that was released by somebody who lives here, sort of a shadowy character who — who made an extremely offensive video directed at — at Mohammed and Islam —

OBAMA: Making fun of the Prophet Mohammed. And so, this caused great offense in much of the Muslim world. But what also happened, extremists and terrorists used this as an excuse to attack a variety of our embassies, including the one, the consulate in Libya.

As a result, the filmmaker, Nakoula Basseley Nakoula, was made the scapegoat for the administration’s own incompetence by not providing adequate security at the Benghazi facility. He was eventually arrested on probation violation for producing the video, and the arraigning judge referred to him as “a danger to the community,” as Deadline Hollywood reported.

“The judge said she was detaining him because ‘the court has a lack of trust in the defendant.’ She explained that he has engaged in a lengthy pattern of deception in a variety of situations, and that he poses ‘a danger to the community.’”

But even more egregiously, from a First Amendment standpoint, the Obama administration attempted to get the video, titled Innocence of Muslims, removed from YouTube’s vaults, according to the Associated Press via Yahoo News.

“The trailer still can be found on YouTube,” the AP reported. “The Obama administration asked Google, YouTube’s parent, to take down the video but the company has refused, saying it did not violate its content standards.”

Shorter @BarackObama: we can’t let North Korea shut down a Sony film, but we can let Al Qaeda ban a YouTube video. And jail the filmmaker

The Federalist co-founder Sean Davis followed up with a real doozie:

Obama: Where’d you learn to intimidate filmmakers? Kim Jong-un: From you, okay? I learned it by watching you! pic.twitter.com/qGanZqesaC

Obama’s support for the First Amendment runs with the tide — it comes in, and goes out.

Check out more tweets on Twitchy.

Joe the Plumber: If I were president, this is what I’d do with North Korea
Next Post
Ray Rice fallout continues with release of a third video (Video)