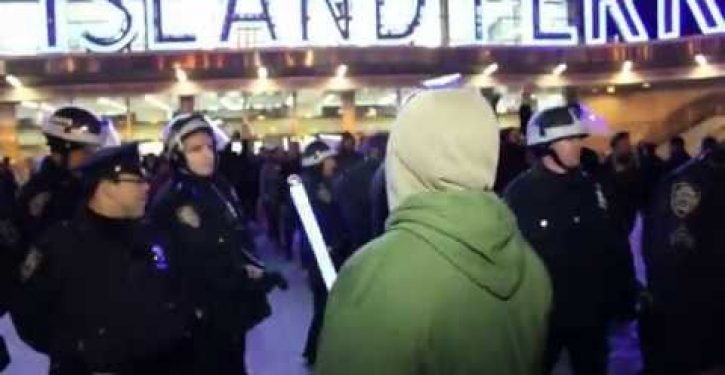 And this year’s Anti-Police Protest Chutzpah Award goes to 22-year-old Yotemeli Sayer, who assaulted not one but two NYPD officers attempting to keep the peace at noisy protests, then had the temerity to stop by the station house to reclaim his personal property. Unfortunately for Sayer, his actions were caught on video (there’s a lot of that going around these days), and now he is in seriously hot water.

The New York Post explains that Sayer punched a sergeant at one rally and fled the scene. An hour and half later, he assaulted a second officer at a second rally, but this time was arrested.

Cops confiscated his fanny pack before tossing him in a holding cell.

Buy when he returned on Tuesday to pick it up at One Police Plaza, officers busted him for the first assault, police sources said.

A YouTube clip captured the assault, which was uploaded the same night.

What country with the initials U.S.A. is among least racist in the world?
Next Post
The dumbest man in Congress just called supporters of Ben Carson stupid (Audio)