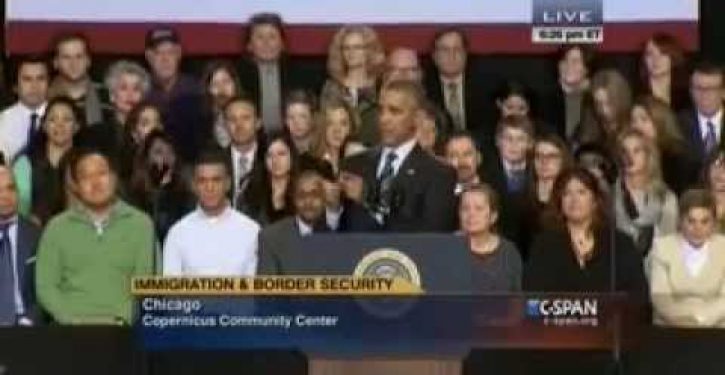 During a Tuesday evening speech, President Barack Obama admitted he violated Article I of the U.S. Constitution which provides, “All legislative [i.e. lawmaking] powers herein granted shall be vested in a Congress of the United States, which shall consist of a Senate and House of Representatives.”

The Chicago address, centering on his recent executive action granting legal status to an estimated five million undocumented immigrants, proved to be no homecoming for the president when hecklers repeatedly forced him to go off script.

After listening to the their complaints about deportations, Obama finally said:

Then he threw out an admission that the White House has repeatedly denied — that the president’s executive order changed existing immigration law.

“What you’re not paying attention to is that I just took an action to change the law,” he said, giving fuel to Republican complaints.

Watch the exchange in the following video. Story continues after clip.

Social media lit up after this statement, beginning with this tweet from The Weekly Standard senior writer Mark Hemingway:

Our constitutional law professor-in-chief: “Obama Admits: ‘I Just Took an Action to Change the Law’” http://t.co/fGbO3ztOjh

Then there were these observations, as Twitchy recorded:

The president has proved to be one of the most talented political orators in recent history — until he goes off script. It’s at those moments when he ignores the teleprompter that he gets into trouble. Tuesday night in Chicago was one of those.

Georgetown senior: I understand being mugged because I’m privileged, or something
Next Post
Obamacare gives employers $3,000 tax break to hire illegals over US workers