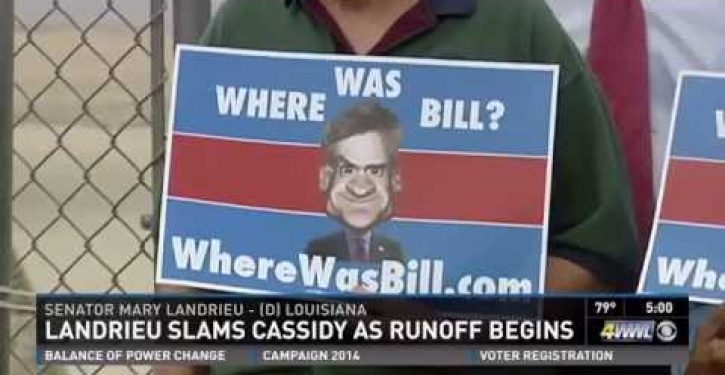 Any lawyer can tell you: Never ask a question unless you know the answer. That admonition would have spared Louisiana Democrat Mary Landrieu a severe bout of foot-in-mouth disease on Day 1 of her runoff election for U.S. Senator against Republican challenger Bill Cassidy.

Posing for a photo op in front of the construction site front of a VA hospital in New Orleans that was destroyed during Hurricane Kartina, Landrieu asked:

When this hospital needed a champion to build and rebuild, literally out of the rubble of Katrina and Rita, … where was Bill?

It would have made for great optics and might have helped her in a runoff pundits are predicting she will lose if Cassidy hadn’t tweeted back an answer to her question:

Mary Landrieu wants to know where I was during Hurricane Katrina? Setting up a surge hospital for refugees. #LASEN http://t.co/YUVH0HKUc5

The link in his Twitter message is to an article in Money magazine which reveals that at the time of Katrina, he was a medical doctor working in Baton Rogue. After the storm hit, Cassidy took it upon himself to set up a makeshift emergency hospital in an abandoned K-Mart to administer first aid and care for victims.

Back to you, Sen. Landrieu. Next question?

Where does Obama Attorney General nominee Loretta Lynch stand on Islamic jihad?
Next Post
NBC’s Chuck Todd: Republicans have secured control of the House through 2022 (Video)