Wisconsin Gov. Scott Walker got the benefit of an eleventh-hour October surprise when two former executives of the Trek Bicycle Corporation claimed that Mary Burke, his Democratic challenger, was forced out of a position with her family’s business 21 years ago for incompetence.

Trek was founded by Burke’s father, Richard Burke, in 1976, and her brother John currently serves as its president and CEO. The candidate was formerly the company’s head of European operations until she left Trek 21 years ago.

“I’m not saying she was incompetent,” Tom Albers, former Trek chief operating officer who left the company in 1997 told the Milwaukee Journal Sentinel. “Maybe this job was too big for her.”

So maybe being governor of Wisconsin would be something she could more easily manage?

Both Burke and Trek take issue with Albers’ claims. The Journal Sentinel reported:

Burke and Trek Bicycle called the claims outrageous, pointing out that the statements are being made by former Trek employees who had to leave the company, are both conservative and are airing them just six days out from Tuesday’s tight election.

The candidate described the characterizations against her as “the kind of smear that has gone on since the start of this campaign.”

There are two problems with her statement: First, the claims didn’t come from the Walker campaign but rather from two private individuals. Second, the smears in the campaign seem to have all come from the Democrats.

Last month while campaigning on behalf of Burke, Democratic National Committee chairwoman Debbie Wasserman Schultz accused Gov. Walker of giving “women the back of his hand,” and described Republicans as knuckle-dragging wife-beaters, as Liberty Unyielding reported.

As for the allegations of incompetence directed against Burke, the Journal Sentinel reported:

Albers said in an interview Wednesday that he was sent to Europe by Richard Burke, the company founder and Mary Burke’s father, to look into problems with the European sales expansion that Mary Burke had been entrusted to head up in the early 1990s.

Albers said John Burke had concerns that his sister was not working out as the point person on the difficult job of switching from outside distributors of Trek bikes in Europe to a company sales force that spanned different countries, cultures and languages.

“I came back and pretty much reinforced what John Burke had told (Richard Burke) that this wasn’t working, and a change had to be made and a change was made,” Albers told the newspaper. “I felt she was under water and it was going to be very difficult to turn it around.”

Albers supports statements made by another former Trek executive, Gary Ellerman, who was its human resources director.

“[Burke] is and this is an opinion, OK, she’s not as smart as her paper would say,” Ellerman told the Wisconsin Reporter, a conservative website. “She didn’t understand how the bike business — and how bikes are sold, particularly in foreign countries. So to be in charge of that process is a recipe for disaster, and that’s exactly what happened.”

Twitter took note of Burke’s lack of competence claims, and conservatives took delight, according to Twitchy:

“I’m not saying she was incompetent…maybe this job was too big for her..” And being governor of Wisconsin isn’t? http://t.co/z3MbzlbK2n

The latest Real Clear Politics average of polls has Walker up two points on his rival, 47.8% to Burke’s 45.8–too close to call. Perhaps this news will give the Republican a welcome and unexpected boost.

Child returning from W. Africa banned from school for 21 days due to Ebola fear, family sues
Next Post
Video: Takeoff on DirectTV ads urging you to vote 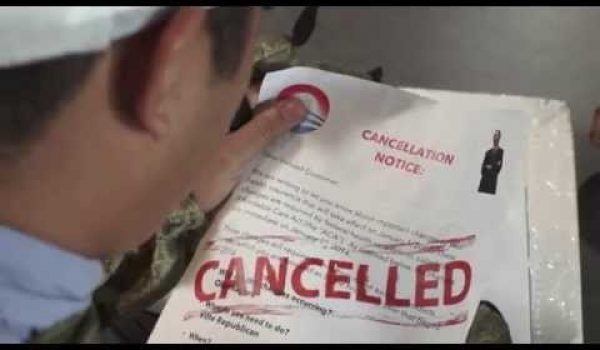