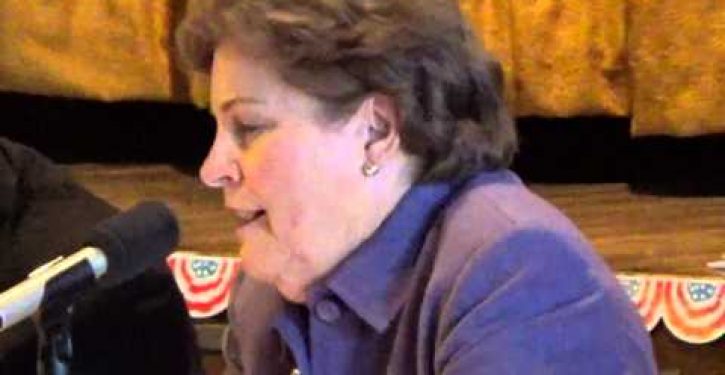 Her challenger, Scott Brown, used the moment to demonstrate once again the talent that propelled him to the U.S. Senate in 2010 as a Republican in deep-blue Massachusetts–the ability to think on his feet.

This time it happened when Brown was outlining Shaheen’s anti-business voting record.

“She’s voting against small business 100 percent of the time,” Brown told the audience. “She’s got a zero rating from the National Federation of Independent Business. I received their endorsement, but not only them but from the Chamber of Commerce, because—“

It was at that point when Shaheen leaned into her microphone to deliver four words that could easily have come from Senate Majority Leader Harry Reid (D-Nevada):

The audience immediately reacted with boos and shouts of “Rude! That’s rude!”

Although Shaheen had already delivered her own closing statement, Brown gave her another chance at the bat.

“No, I’d like to defer to Sen. Shaheen,” Brown graciously said, quelling the crowd.

That’s when Brown corrected her.

“Well, because I was closing, and I gave you the courtesy to allow you to speak,” he shot back.

The audience erupted in applause and cheers. Watch the exchange. Story continues after clip.

A similar moment occurred during the final debate in the race to fill a vacancy left by the late Sen. Edward M. Kennedy in 2010.

The moderator, David Gergen, asked Brown if he would be comfortable using Kennedy’s seat to vote against the Affordable Care Act–something the late senator strongly supported.

Brown response quite possibly was the turning point in his campaign.

“Well, with all due respect, it’s not the Kennedys’ seat, and it’s not the Democrats’ seat–it’s the people’s seat.”

Brown entered his current race in the weeds. Shaheen, who often labels her opponent as a carpetbagger, is popular among her constituents as their senator, and previously as their governor. But Brown is closing the gap.

Although the most recent Real Clear Politics poll average still shows him playing catch-up, it’s nonetheless too close to call. Shaheern has 48.2 percent support to Scott’s 46–a mere 2.6 percent difference.