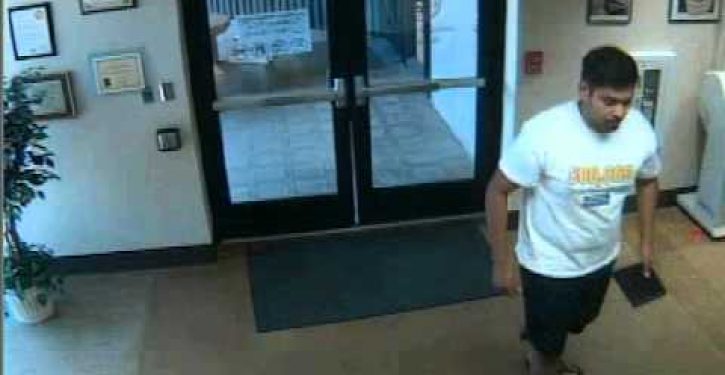 “Let’s be clear, the real voter fraud is the people who try to deny our rights by making bogus arguments about voter fraud.” So said President Obama in April of this year, dismissing the GOP’s support for voter ID laws as nothing more than a thinly veiled attempt to disenfranchise poor minorities. So, in Obama’s view, New York City really does have 850 voters who are 164 years old.

And a foul-mouthed liberal activist defiantly stuffing hundreds of ballots into a ballot box at a polling place in Phoenix was a figment of the poll worker’s imagination — this despite the fact the man’s actions were caught on video.

According to the Arizona Daily Independent, A.J. LaFaro, chairman of the Maricopa County Republican Party, was working with the Election Board at an early ballot processing center in Phoenix on Aug. 25 when “he heard a loud thud and turned to see what was going on. LaFaro is quoted as saying:

A person wearing a Citizens for a Better Arizona (CBA) t-shirt dropped a large box of hundreds of early ballots on the table and started stuffing the ballot box as I watched in amazement.

Faro states that when he asked for the man’s identity, he was told to go “blank” himself. A surveillance video follows, but unfortunately there is no sound track, meaning we have only LaFaro’s word for what went down

But how would the president and his fellow explain the troubling revelation in New York noted at the outset? Then there are these unsolved mysteries:

Senate Democrats: ‘Ineptitude of White House political operation’ is ‘embarrassing’
Next Post
Dem governor threatens to commute sentence of killer of 4 if he’s not re-elected