The fathomless disconnect that is the Obama “policy” on ISIS in Iraq and Syria can be conveyed – if not fully explained – by three disparate but related data points.

One is that we keep getting our briefs on U.S. activities in Iraq and Syria from the State Department.  With weapons of war being used by U.S. forces, purportedly for systematic purposes, we nevertheless hear about the use of those weapons from a couple of mid-level civilian staffers at Foggy Bottom (Marie Harf and Jen Psaki) with no military background or expertise.

I don’t know why no one in the mainstream media seems to find that odd.  It was only a few years ago that Americans were fully conditioned to something much more logical: the many decades of having military activity explained to us by military commanders and military spokesmen.  When our armed forces were engaged somewhere, we expected to hear about objectives, strategy, and operations from the Pentagon.

It’s an understatement to say that Harf and Psaki lack credibility on national security matters.  How can we possibly take the Obama administration’s policy seriously?

The second data point is the peculiar discussion, encouraged by media questioning, of whether we will impose a no-fly zone on Syria.  Once again, today (Sunday, 12 October), the no-fly zone question was raised with General Martin Dempsey on ABC’s This Week.

It’s a deeply silly discussion, at this point.  What purpose of the United States would be served by imposing a no-fly zone now?  Does ISIS or Al-Qaeda (the Al-Nusra Front) have an air force?  Is someone flying arms to them from outside Syria or Iraq?  What objective of ours is served by keeping Bashar al-Assad from using his air force?  The question here is not whether he’s bad; he is.  The question is what our objective would be in keeping his air force grounded.

Talking about a no-fly zone for Syria comes off as an outdated legacy touchstone, something to bring up for no other reason than that it was the last tactically meaningful thing anybody understood about U.S. policy and Syria.  (And that’s from 14 months ago.)

But the whole situation is different now.  ISIS has changed it.  The holdover discussion of a no-fly zone blows open the window on reality, exposing the fact that we have no coherent policy, no strategy, and no objective for our intervention in Iraq and Syria.

You cannot logically frame a no-fly zone for Syria in a statement of the Obama administration’s current policy.  Go ahead, try.  You can’t do it.  (I’m serious.  No matter what you come up with, your proposition still won’t be a statement of what Obama’s policy is.  You may think you see a reason for a no-fly zone, but your logic won’t relate to an actual policy of Obama’s.)  And yet the media, for lack of anything else to talk about, keep bringing it up.

The third data point leads to our subject topic.  It’s this:  the world’s attention has been focused for the last week or more on the fight for the town of Kobani, yet something much more significant to everyone’s future is happening to the south.  The Battle of Baghdad has begun.

Back in June, I warned that ISIS would take its time in the approach to Baghdad.  (See here as well.)  ISIS wasn’t going to mount the sort of military attack on Baghdad that we saw on Mosul earlier this year.  What we could expect to see was a consolidation of ISIS’s hold on the Euphrates corridor through Anbar Province (map below), from the Syrian border to Baghdad, followed eventually, at a time ISIS considered propitious, by a ramp-up of terrorist-style bombing attacks inside Baghdad.

We should be watching for those bombing attacks to begin, I predicted in June.  And now they have – at the same time ISIS has made advances along the Euphrates corridor that materially threaten the Iraqi national forces’ hold on their remaining positions there.  The Iraqis are extremely worried that they can’t hold those positions unless the U.S. brings in ground troops.

Just this weekend, meanwhile, as General Dempsey outlined this morning, we had to deploy Apache helicopters to defend the main international airport west of Baghdad from ISIS.  ISIS is only a handful of miles from Baghdad’s western edge – and the attacks inside the city, which are intended ultimately to sow chaos and disrupt the cohesion of the governing coalition, have started.

The point here is not to pat myself on the back, but to establish that this was foreseeable.  Baghdad is too big to bite off in a guerrilla blitzkrieg, a la Mosul.  ISIS has been methodical in both cases, but had to slow its approach to Baghdad, in comparison with the assault on Mosul.

ISIS was never likely to try to approach Baghdad from the north, either, because ISIS’s operational rear is in Syria, and the Euphrates corridor is its “interior” line of communication to the ISIS stronghold between Raqqa and the border.  The Tigris corridor from the north is poorly protected, exposed, and not linked directly or conveniently to Syria.  It’s also flanked in the extreme north by the Kurds.  Under current conditions, ISIS has to put more into just holding onto its positions north of Baghdad than it can afford to devote to a supporting effort.  Better to assault Baghdad from the west.

This is it: the battle for Baghdad and the future of Iraq has gotten underway.  We can expect it to go on for weeks – perhaps months – and be excruciating for the people of Baghdad.  ISIS won’t make tactical assaults where its forces would be overmatched.  The guerrilla troops of ISIS will refuse battle on conventional terms as much as they can.  They will fight west of the city where they can ambush and slaughter Iraqi national troops, but inside the city ISIS’s method will be to make neighborhoods increasingly uninhabitable, disrupt the operation of police, and drive the people from their homes and businesses.

As long as we continue merely reacting to what ISIS does, rather than adopting objectives and a strategy of our own, this process will be uncontainable.  We may be able to make the agonizing street-to-street defense of Baghdad last a little longer.  But in the sense of preserving the status quo ante, it will ultimately fail.  Even if someone else manages to repel ISIS from Baghdad – and nothing can be excluded at this point – the geopolitical end-state will be something different from the status quo of today.

Yet ISIS is actually quite vulnerable, given that it must hold its positions in the Euphrates corridor, and ideally would like to consolidate additional positions: drive out the Iraqi national forces that are still there.  There are places to target where ISIS is concentrated geographically.  Even in our degraded state, the U.S. military could still bring overwhelming force and drive ISIS out of Anbar Province – if it were given a clear-cut task to do so.

It’s obvious at this point that that won’t happen.  As we watch, helplessly, the coming season of sorrow for Baghdad, we can at least learn a mighty lesson about the concepts of policy, strategy, and intention.  When you have none of these things yourself, it will be nearly impossible to even figure out what’s going on.  You have no framework for interpretation; everything is just a disconnected impression for you, like the Brownian movement of Obama’s anti-policy on Iraq and Syria.

Refusing to have a positive, assertive intention actually paralyzes you at the outset, making it hard to identify events for what they are, much less categorize and prioritize them.

The modern West has so deconstructed its moral confidence that its leaders see the intrinsic human act of having intentions as a form of unacceptable aggression.  ISIS hasn’t hamstrung itself in this manner.  That’s why ISIS is winning today, while Americans and other Westerners, with all our theoretical advantages, can’t even figure out what’s happening.

Report: Over 90% of mass shootings in U.S. from 2009 happened in ‘gun-free zones’
Next Post
Video: GOP to blame for Ebola 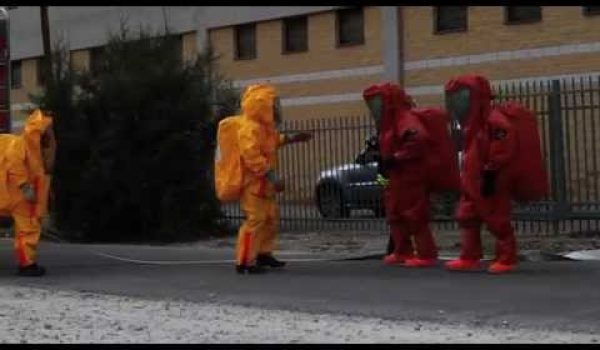