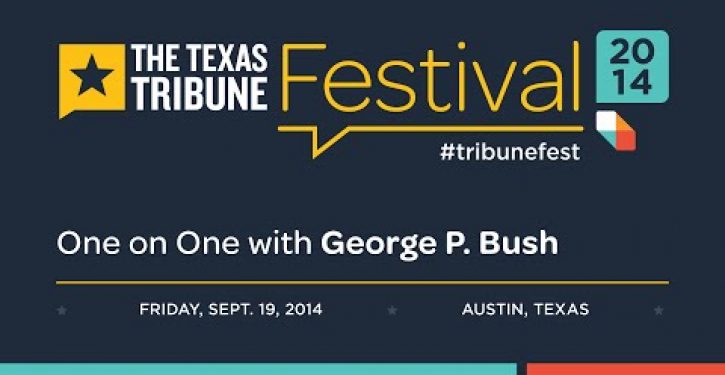 George P. Bush, running for Texas land commissioner, won’t endorse his father, former Florida Gov. Jeb Bush, should his father decide to run for president in 2016. “I’m staying out of that race,” he said during an interview Friday night at The Texas Tribune Festival, according to The Hill.

The younger Bush made his political leanings pretty clear by endorsing tea party favorite Ted Cruz over the GOP establishment’s David Dewhurst for a U.S. Senate battle in 2012. We know how that one went. The then-Texas Lt. Gov. Dewhurst lost to Cruz, who is now reportedly considering a presidential run himself.

And that’s what led to the question about 2016 endorsements, which took place at about the 54:50 mark in the interview.

Bush’s “I’m staying out of that race,” comment was actually in response to a question about his continued support for Cruz should the Texas senator throw his hat in the ring.

The Texas Tribune’s Editor-In-Chief followed up by asking if his decision to stay “out of that race” would hold true if his father should run.

Bush’s response, “I think folks know that I love him,” immediately drew laughter from the crown.

“You know the headline tomorrow will be: George P. Bush: Too Busy to Endorse his Dad,” Smith quipped.

Bush said, “You caught me on that one.”

Conservatives’ biggest criticism of Jeb Bush is his enthusiastic support for the Common Core curriculum and standards in education.

Watch the full hour-long interview below, via The Texas Tribune. In it, Bush also talks about his famous uncle and grandfather, as well as his own thoughts on the issues in his run for Texas land commissioner.