Initially, he confessed to being strategy-less, which shocked commentators and pols on both sides of the ideological spectrum. Then he declared at a press conference that his plan was actually to “destroy” and “contain” ISIL. When the self-contradictory nature of this threat was pointed out to him, he revised it to “degraded and destroyed,” which the White House is now proclaiming to have been the “strategy all along,” even though that’s a goal, not a strategy.

With a president this confused and clueless, an organization as (regrettably) well-organized as ISIS hardly needs a PR campaign to quash the threat from the Obama administration. Yet, that is what they appear to be doing.

This week the Telegraph ran the image that follows:

Here was the headline and subhead:

How ISIL doctored the image of Obama, making him appear haggard in videos.

The terrorist group carefully manipulate their videos to make the US president look as tired and weary as possible, demonstrating its technical prowess.

Welcome to war in the modern age where our enemies use media manipulation to taunt President Obama. (Remember when Putin and the Russians made light of Obama’s wimpy image using the kitty cats? Click here if you missed it.)

Below, the Telegraph describes the techniques ISIL used to doctor the image of Obama:

Obama’s blue jacket is made to appear a funereal black. His strands of grey hair are picked up and exaggerated. The editor has also caused an interlacing effect of black lines to run across the president’s white shirt. For good measure, he has carefully stretched the screen length ways in order to make Mr. Obama appear thin and gaunt.

Appear thin and gaunt? Do they mean as opposed to his usually hail, robust, and manly aspect?

Oops! Feds rorced to reprocess FAFSA, again
Next Post
Finally, Obama draws a ‘red line’ that will not be crossed on his watch (Video) 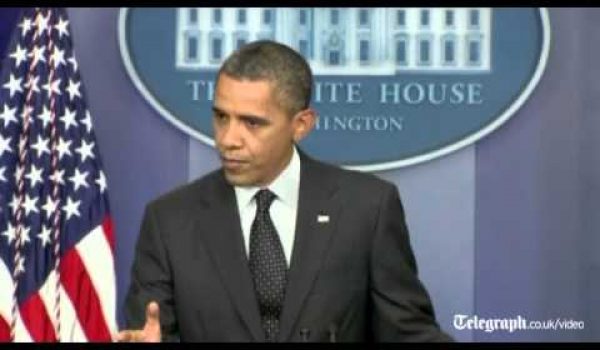