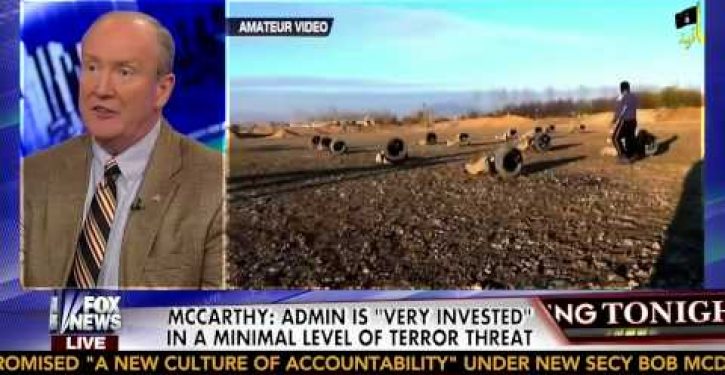 The White House denied that a state of war exists between the United States and the Islamic State, better known as ISIS. This doesn’t quite jibe with the terrorist group’s thinking in the matter–it says it will continue beheading American hostages until hostilities cease.

“Before getting into the strategy, though, there seems [to be] a fundamental, existential question: Is the United States presently at war with ISIS — yes or no?” the program host Chris Hayes asked, according to Business Insider.

“No, Chris,” Earnest said. “What we are doing is we are working very aggressively with international partners, with Iraqi and Kurdish security forces, to take the steps necessary to mitigate the threat that’s posed by ISIL.”

He was asked the same question earlier in the day by MSNBC “Morning Joe” host Joe Scarborough, who referred to an opinion by Washington Post columnist Eugene Robinson that “This is war. Unless you ask President Obama, of course.”

Earnest insisted that it wasn’t a a state of war so much as a threat mitigation.

“I think what the president would say is it’s very important that we take the necessary steps to mitigate the threat that ISIL poses to the United States of America,” he said.

If there was any mitigation going on, it was being performed by the White House press secretary. He’s trying to mitigate the damage caused by President Obama earlier on Thursday when he said “We don’t have a strategy yet” on ISIS.

The Islamic State has a different opinion. Just prior to murdering American journalist James Foley earlier this month, his executioner said as much without actually using the word “war” in his message to Obama, according to the Daily Mail Online:

This is James Wright Foley, an American citizen of your country. As a government you have been at the forefront of the aggression towards the Islamic State.

You have plotted against us and gone far out of your way to find reasons to interfere in our affairs. Today, your military Air Force is attacking us daily in Iraq.

Your strikes have caused casualties amongst Muslims. You are no longer fighting an insurgency.

We are an Islamic Army and a state that has been accepted by a large number of Muslims worldwide.

So any attempt by you, Obama, to deny the Muslims their rights of living in safety under the Islamic Caliphate will result in the bloodshed of your people.

ISIS already has his next victim picked out–a 26-year-old American female humanitarian worker, who was kidnapped in Syria last year, according to ABC News. Her name hasn’t been released at her parents’ request.

And what’s the president doing? After receiving his daily briefing, he’ll spend the rest of Friday attending three fundraisers, according to the White House schedule.

Obama’s insistence that we’re not at war with ISIS amounts to flawed reasoning at best. We weren’t at war with Japan either, until they attacked Pearl Harbor.

So why is the president unable to admit to the threat ISIS poses to the United States? National Review contributing editor and former lead prosecutor in the “Blind Sheik” trial Andrew McCarthy says it all comes down to hubris. He can’t admit he was wrong.

Colorado gun lobby threatens to sue library over weapons ban
Next Post
New theme: Obama has no strategy because his advisors can’t agree