The Michael Brown affair — the Missouri teen who was slain by a police officer — is reminiscent of the Trayvon Martin case of a few years ago. But also like Martin, evidence continues to mount casting doubt that this was the cold-blooded murder demonstrators would have us believe.

Eyewitnesses, including Dorian Johnson, the individual accompanying Brown at the time he was killed, have testified repeatedly that Brown was shot while he was running away from the officer, identified as Darren Wilson.

Wilson, however, claimed that Brown was charging him when he shot the teen. Wilson’s account of events have now been bolstered by a preliminary autopsy report, according to The New York Times.

The autopsy indicated Brown had been shot six times. The paper reported:

One of the bullets entered the top of Mr. Brown’s skull, suggesting his head was bent forward when it struck him and caused a fatal injury, according to Dr. Michael M. Baden, the former chief medical examiner for the City of New York, who flew to Missouri on Sunday at the family’s request to conduct the separate autopsy. It was likely the last of bullets to hit him, he said.

Mr. Brown, 18, was also shot four times in the right arm, he said, adding that all the bullets were fired into his front.

In short, he wasn’t running away, as witnesses claim. The final, fatal bullet that entered the top of Brown’s skull adds further credence to the the officer’s testimony that Brown was charging him.

Prior to the release of the medical examiner’s findings, Brown’s “martyrdom” prompted the construction of a makeshift shrine, which included ball caps, Mogen David MD “Mad Dog” 20/20 fortified wine, cough syrup and bottles of liquor, according to this photo posted in Goodbye America.

The only thing missing was a box of Swisher Sweet cigars, the brand Brown reportedly stole in a strong-armed robbery of a local convenience store just minutes before he was shot.

Man seen carrying wooden cross on his back to #ferguson #brown shrine pic.twitter.com/hpW9Pe0rhm

By its very inclusion, the sacred symbolism of the cross was made profane.

One thing missing from the preliminary autopsy was the toxicology report. When people on Twitter began wondering about it, St. Louis Alderman Antonio French tweeted that it wouldn’t be available until September.

Talk of a pending toxicology report resulted in a flurry of dissent from apparent Brown supporters. Here are a few examples, via Twitchy.

WTF is this? Why perform toxicology http://t.co/Cd5u7ZxDdH on #MikeBrown as opposed to the killer cop?

Please explain to me why they need to run a toxicology test. What about the cop who killed Michael Brown? Will he get tested? #Ferguson

There are some illegal substances — most notably methamphetamine — that cause extremely aggressive behavior in the user.

These are some of the effects of “meth,” according to the Jefferson County (Missouri) Sheriff’s Department.

In large doses, methamphetamine’s frequent effects are irritability, aggressive behavior, anxiety, excitement, auditory hallucinations, and paranoia (delusions and psychosis). Abusers tend to be violent. Mood changes are common, and the abuser can rapidly change from friendly to hostile. The paranoia produced by methamphetamine use results in suspiciousness, hyperactive behavior, and dramatic mood swings.

Just as Martin’s “martyrdom” fell apart as the evidence came in, so too is Brown’s.

An ‘open-and-shut’ case of police brutality in Ferguson, MO’s past
Next Post
Did Jesse Jackson make karate chop motion at Fox reporter in response to Chicago question? 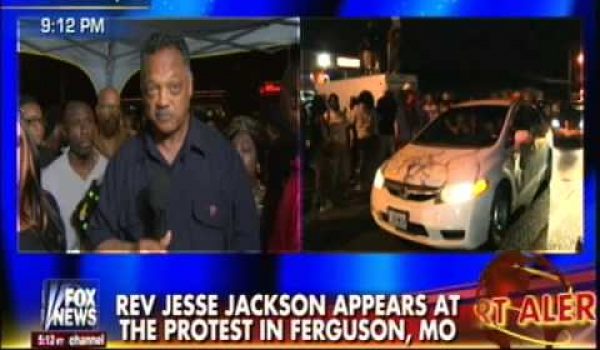