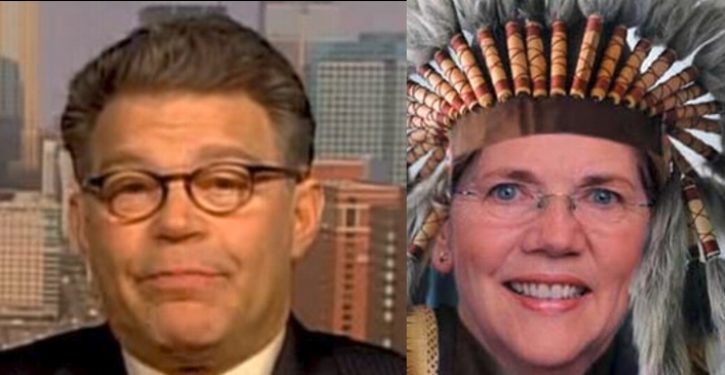 If it’s not the end of the world as we know it, it’s the collapse of – at the very least – the brittle leadership of Western civilization.

The average Joe in the street is smart about the relative positions of civilized people and radical Islamists, in a way the political elite of the West are not.  Our political leaders are apparently self-deluded idiots.  The day when it was intemperate to make the observation in those terms is past.  It’s not even rhetorically sloppy or irresponsible to put it that way.  It’s nothing more than holding our political leaders to the same standard we would hold anyone else, in confronting reality and doing something about it.

If we saw a fireman trying to negotiate with a fire, or proclaiming that the fire had legitimate grievances, or asserting that in the matter of the fire, there should be no victor or vanquished out of the engagement, we would call that fireman an idiot.

The same standard is applicable to political leaders who want to adopt those postures with Islamists – whose patterns are quite as predictable and inevitable as those of a fire.  Whether they are operating through politics, guerrilla warfare, or terrorism, the methods and goals of Islamists in each realm are uniform and unvarying.   Islamists are moral actors, of course, since they are human beings.  But if I predict that their behavior, unopposed, will be like that of a fire, wreaking destruction on what matters to us and using everything in its path as fuel, I will be right.  Their status as humans doesn’t make them less predictable than a fire.  Their Islamism is the controlling factor.

And that is a moral conundrum for the rest of the world.  It isn’t wrong to point out that the civilized world can’t just adopt a strategy of killing everybody on the other side.  To do that is to have death and life set before us, and to choose death.  The West, as a civilization, has to find a better response.

But the West already has an answer to what our priority should be while the fire is raging.  And that’s protecting people and people’s interests on territory.  Put out the fire first.  Then talk about why it started and whether larger policies need to change.

One more observation on the fire analogy, before we move on to three fresh examples of idiocy.  When Israel responded to the latest instance of terror-rocket escalation by Hamas, a number of op-eds referred to the Israeli strategic posture as “mowing the grass”: doing some routine maintenance on the security problem posed by Hamas.  I think a better metaphor is one that depicts Israel as having had to maintain a “reflash watch” since 2005.  Hamas in Gaza is a nest of perpetually smoldering embers, flaring back up from time to time – 2008, 2012, 2014 – and needing to be extinguished again.

Which brings us to our first example.  The governments of Germany, France, and the UK, seeing this whole “Israel-Gaza-Palestinian-Arab” thing as a sort of extended negotiation, have officially endorsed caving in to the “demands” of the fire (see Daniel Greenfield and Yisrael Medad; punctuation revised from original and emphasis mine):

“’To be sustainable, a ceasefire must envisage steps to address both Israeli security concerns and Palestinian requirements regarding the lifting of restrictions on Gaza.’”

Israel has security “concerns” while Hamas has “requirements.” And you know which takes priority. Concerns or requirements.

As Yisrael Medad points out, the German version explicitly calls for lifting the blockade of Gaza. The French version sticks to the ‘restrictions’ language.

But the German version is enough, given that the three foreign ministries issued a joint statement, and did not stipulate a disagreement on language.  The leadership of Western Europe has explicitly endorsed caving to the demands of a terrorist organization that deliberately fires weapons of war at civilians; uses its own people as human shields; urges its people not to heed Israeli pre-strike warnings and seek safety; turns hospitals and mosques into targets by using them for firing positions, weapons storage, and operating bases; uses terror and kidnapping tactics against Israeli soldiers; detains and intimidates the foreign media; and will inevitably use unrestricted trade into Gaza as a means of importing arms and rebuilding a war arsenal with which to attack unarmed Israelis and endanger unarmed Gazans.

In other words: the European leaders propose to meet the fire’s demand for more fuel so it can burn and destroy more.

Example two was noted earlier by our alert LU Staff: Elizabeth Warren (D-MA) coming out swinging for a “negotiated solution” in Iraq, where the threat to the recognized government – not to mention millions of people and billions in public infrastructure – is from a relentless guerrilla-terrorist army that shows its respect for others by driving families from their homes, crucifying and slaughtering men, enslaving and abusing women, and beheading children.

The point is there has to be a negotiated solution in Iraq, but we don’t negotiate with terrorists. This is partially a question of whether the U.S. government negotiates or whether we have the Iraqi government doing these negotiations…

In other words: the only way to deal with this raging fire is for someone to walk up to it and try to reason with it, as long as it’s not us.

Leader of the free world

The third example comes from Barack Obama.  He sat down last week for an interview with Thomas Friedman, and they hit it off like, well, a house afire.  Certainly, Friedman had no occasion to try to frame fairly any arguments he didn’t already agree with – presumably the happiest of positions for an opinion writer painting a politician’s likeness.

With Islamists rampaging through the Middle East and North Africa on various careers of political and/or military destruction, Friedman outlines the thesis by which Obama is guided:

Obama made clear that he is only going to involve America more deeply in places like the Middle East to the extent that the different communities there agree to an inclusive politics of no victor/no vanquished. The United States is not going to be the air force of Iraqi Shiites or any other faction. Despite Western sanctions, he cautioned, President Vladimir Putin of Russia “could invade” Ukraine at any time, and, if he does, “trying to find our way back to a cooperative functioning relationship with Russia during the remainder of my term will be much more difficult.” Intervening in Libya to prevent a massacre was the right thing to do, Obama argued, but doing it without sufficient follow-up on the ground to manage Libya’s transition to more democratic politics is probably his biggest foreign policy regret.

At the end of the day, the president mused, the biggest threat to America — the only force that can really weaken us — is us. We have so many things going for us right now as a country — from new energy resources to innovation to a growing economy — but, he said, we will never realize our full potential unless our two parties adopt the same outlook that we’re asking of Shiites, Sunnis and Kurds or Israelis and Palestinians: No victor, no vanquished and work together.

I guess we could call this the “straw-man” school of firefighting.  Ignore the fire altogether – in fact, ignore all the arson going on in front of our eyes – and keep the firefighters and other legitimate stakeholders engaged in finger-pointing at each other: an itch-scratching but not a solution-producing activity.

You can only get to the ineffable “no victor, no vanquished” formula by simply leaving out the entities that must be vanquished if life and hope are to survive: ISIS, Hamas, Hezbollah, al Qaeda, a host of other terrorists – and any who embrace the Mohammed Morsi model for leveraging democracy to empower the Muslim Brotherhood.

It’s as if an undergrad seminar were somehow able to bring its topic to life, and keep the drama going through an endless bull session on “deconstructing traditional modes of political engagement” or whatever, while hundreds of thousands of hapless Middle Easterners die horrible deaths in service of the theoretical exercise, stage right.

Obama, meanwhile, will survey the towering flames in the Middle East and apparently continue to think that America’s big security problem is Americans who won’t sell out their belief in constitutionalism, and freedom of conscience and speech.

Cartoonist A.F. Branco last week captured perfectly the attitude of Islamists toward the “no victor/no vanquished” proposition, as well as the inanity of Western leaders pushing it, in his portrayal of John Kerry trying to “mediate” between Israel and Hamas.  Hamas’s desire to kill the Jews and crush Israel is non-negotiable on the same principle as ISIS’s slaughter of Christians and Shias in Iraq – and the Muslim Brotherhood’s torching of churches and abduction of Christian girls in Egypt; and Al-Shabaab’s vicious subjugation of non-Salafists in Somalia; and Sudan’s slaughter and persecution of non-Muslims in the south; and Boko Haram’s brutal campaign in Nigeria; and the Taliban’s in Afghanistan and Pakistan; and Iran’s cynical sponsorship of terrorism and cruel regimes across the Middle East; and the 9/11 attacks; and the 7/7 attacks; and the attack on the Parisian synagogue on the Rue de la Roquette on 13 July 2014, which has cast the dark shadow of a black hand over Europe in a way we have not seen for 70 years.

There is no meeting halfway the organized determination of Islamists to silence, browbeat, kill, maim, and enslave.  There is no “coexisting” with it.  There will be a victor, and a vanquished, no matter what Thomas Friedman and the West’s current crop of political leaders want.  Millions of ordinary people see that quite clearly.  The millions may not see clearly what needs to be done about it, but they start with an advantage our political leaders no longer have: a firm grasp of reality.