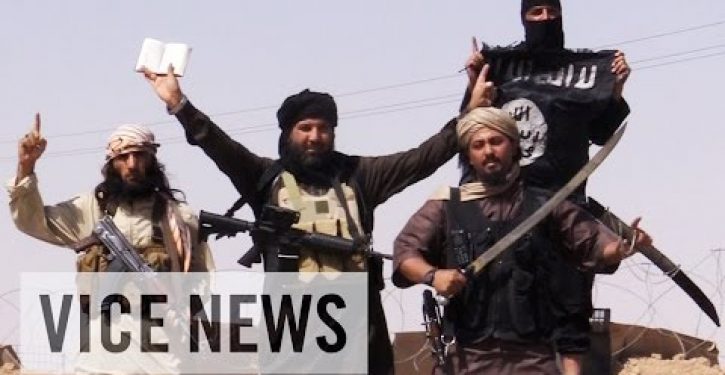 Independent media agency VICE News has begun posting a five-part video series on ISIS, or Islamic State, and it’s splashy coming right out of the gate.  ISIS issues a challenge to the United States, and it occurs in Part 1, just after the 4:40 mark.

I say to America that the Islamic Caliphate has been established.  And we will not stop.  Don’t be cowards and attack us with drones.  Instead send your soldiers, the ones we humiliated in Iraq.  We will humiliate them everywhere, God willing, and we will raise the flag of Allah in the White House.

There are obvious wisecracks to make, such as whether it would be redundant for ISIS to have to raise the “flag of Allah” in the White House.  (Yes, I see you readers out there, ready to make with the witticisms.)

But I’d rather use up my attention bullet on some more serious, if brief, observations.

1.  ISIS didn’t issue this challenge to Russia, China, the UK, France, Germany, or Japan.  This is not because America has been noticeably more powerful or effective than the other nations out there in the past five years, in any sense.  In the realm of geopolitics, we’ve let our president turn us, since 2009, back into the miscellaneous middle-rank power we were 100 years ago.  Indeed, we’ve been made into something sillier and worse.  In 1914, there were limits to what we could do, but we didn’t fall for a lot.  In 2014, we fall for anything.

But ISIS isn’t addressing threats specifically to America out of geopolitical motives — and it’s not because they don’t know how to do that.  ISIS is the most geopolitically oriented guerrilla-terrorist movement the world has seen since Mao Zedong.   These are the guys who made allusions to the Sykes-Picot agreement of 1916 in one of their first communication-blasts on the global stage.  They sent a whole generation of media mavens scrambling to Wikipedia to find out what the heck that was, because few  in the West have seen a need to think about geography at all since at least 1989, and certainly not about Sykes-Picot for far longer.

We can bet that the average ISIS foot-soldier knows only what he’s told.  But the leadership of ISIS thinks in terms of history, eschatology, geopolitics, and power.  In these terms, America is at a stumbling, unseemly, hard-to-watch nadir today.  That’s how the leaders of the other nations see us, at any rate.  They don’t bother to taunt us (much).  They’re just getting busy doing the things they couldn’t do while we were in their way, with our annoying principles.

Yet ISIS is taunting us.  It’s taunting us because we represent what almost no other nation does:  the moral — in fact, the spiritual — antithesis of ISIS and radical Islamism.  Barack Obama could cut us down in a geopolitical sense.  But he can’t literally transform America’s moral and spiritual character, because those are up to the people.  With the feral instinct of evil, ISIS’s leader recognizes that.

And this is as good a place as any to observe what must be observed: that a great battle is shaping up between evil and good, on at least the order of the last century’s horrific clashes of state-totalitarianism with consensualism, social peace, and simple humanity.  We are past the time of failing to recognize that and calling it moderation or skepticism.  What it is at this point is blindness.  ISIS is just a small part of that battle’s dynamic.

2.  These guys are piss-ants.  Look at them, doing the brat-pack spin maneuver with the BMP-1 infantry fighting vehicle.  They’re die-young-stay-pretty gangsters.  That doesn’t mean they aren’t well drilled, that they don’t have well-organized leadership, or that we shouldn’t take them seriously.  But it does mean we need to learn from what’s actually going on.  ISIS isn’t 10 feet tall.  ISIS isn’t even 2 feet tall.  It hasn’t had to fight anyone yet who’s more than about 6 inches tall.  It preys on the ill-prepared and unarmed.  (Remember that, as a rule:  when self-appointed boat-rockers and deconstructionists strike a blow at The Man and render him ineffective, the ones who get hurt are always the weak and vulnerable.)

ISIS’s success is an object lesson in the ineffectiveness, internal contradictions, and disorder of a whole lot of things:  the Iraqi government and army, the Assad regime, the proxy-war and alliance policies of Russia and Iran, the fecklessness of the West’s self-congratulatory multilateralism, even the utility of some Russian-made armaments.  These entities all started out weak, stupid, evil, or a combination of those qualities.  It is not the feat many are suggesting to outmaneuver them.

One’s thoughts stray  to the writings of Victor Davis Hanson, who has pointed out how alien decisive warfare actually is to the peoples of the East, in contrast to the West’s tendency to insist upon it as a condition of waging war in the first place.  Armies having at each other ineffectively is more characteristic of this part of the world than decisive engagement (think, in recent memory, of the Iran-Iraq war, as well as the various kinds of civil conflict that continue over decades).  Heroism and determination may be in good supply, but end-states are not.  An ISIS-type force would naturally stand out in this environment.

But ISIS, qua ISIS,  hasn’t had to fight the U.S. armed forces, operated for a decisive purpose, under effective political leadership and well-designed rules of engagement.  A few air strikes over the coming weeks will not constitute that test.  Unless ISIS faces the U.S. Army or Marine Corps, supported by U.S. air power and fighting with neither hand tied behind anyone’s back, there will be no basis for making proclamations about anybody’s modes of war or effectiveness in them.

If that confrontation should actually occur, I have no hesitation in saying that the U.S. armed forces would have ISIS rolled up in a smoking pile of charred remains within a month.  That ISIS looks like the strongest thing on the Mesopotamian landscape today is entirely an indication of how weak everything else is.

3.  ISIS underestimates America.  Americans are not unarmed Yazidis.  We’re not a nation of Barack Obamas either.  We, along with much of the Western world, have reached a point at which our political organization and cultural leadership weigh us down.  They are dysfunctional to an increasingly intolerable degree.  They don’t work for us, they don’t express what we would express, they don’t do what we would do.  There is no foreseeing what will happen over the next few years on this tired old earth, but here’s what will not happen: Americans will not be taken down by any defeat administered to, or through, our official leadership.

Go ahead, ISIS.  Break yourselves on the shoals of a challenge to America.  ΜΟΛΩΝ ΛΑΒΕ.

How to interrupt ISIS’s fevered dream of conquest? Arm the Kurds
Next Post
Cartoon of the Day: Introducing the newest comic book sensation, ‘Climate Hero’