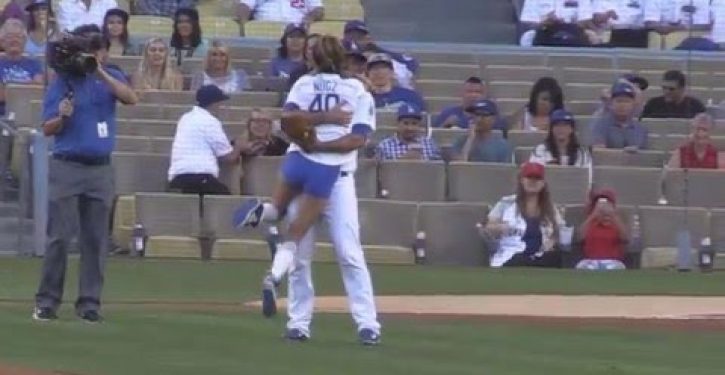 Supermodel and Sports Illustrated swimsuit edition cover girl Chrissy Teigen got the chance to throw out the first pitch at a Tuesday evening major league baseball game. What’s more, not only did she do a heck of a lot better job at it than President Barack Obama, but she was, in her own words, “pretty drunk” at the time.

It all took place at Dodgers Stadium when they took on the Angels. But there was a little celebration going on at the Teigen household prior to the 7:15 p.m. game, and she kept her followers apprised of the goings on by Twitter.

Aug. 6 not only marked her debut on the pitcher’s mound, but was also her father’s birthday, according to her first tweet.

Dad making birthday margaritas like only dad can!! I love you dad, happy birthday!!!! http://t.co/Szun0lFEMe

Well, that’s OK — one or two drinks to help dear old dad celebrate his big day couldn’t hurt, could it? But some time later came this one:

My mom is bombed

But how’d she do? Here’s Twitter user Bonnie Cook’s assessment:

But better yet, here’s the clip of the event so you can judge for yourself:

Stee-rike! Right over the plate! Compare that to the president’s pitching performance on April 5, 20120.

So other than a decent pitch, how did the supermodel make out? Here she is in her own words:

Forget everything you thought you knew about hangovers

And her pitching style didn’t go unnoticed. Here’s the CBS morning show assessment of her performance:

School bus full of Jewish children in Australia terrorized by anti-Semitic intruders
Next Post
Tweet of the Day: 4 Hamas suicide bombers blow themselves up prematurely