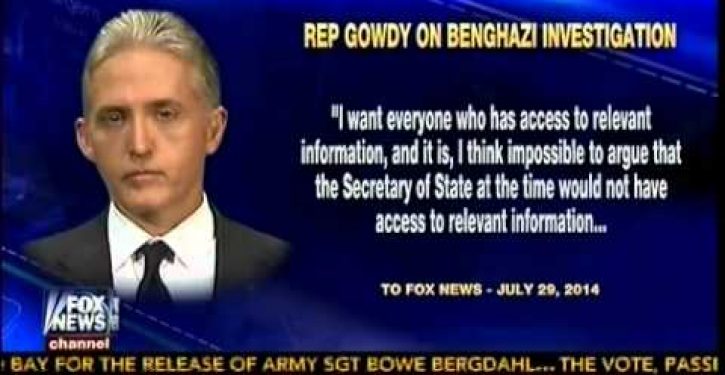 U.S. Rep. Trey Gowdy, R-S.C., chairman of the Benghazi Select Committee, told Fox News Tuesday in an exclusive interview that no witness is off the table — including former Secretary of State Hillary Clinton.

“I can’t skip over a witness that I think we ought to talk to simply because there is an assertion of either privilege or immunity,” Gowdy told Fox News Chief Intelligence correspondent Catherine Herridge, according to Fox. “I want everyone who has access to relevant information, and it is, I think, impossible to argue that the secretary of State at the time would not have access to relevant information…”

Other witnesses of note under consideration are Michael Morell, former acting FBI director accused of using the Banghazi “spontaneous demonstration talking points” to mislead Congress, and the CIA public affairs officer who’d played a major role in editing those points.

“Either talk to all of them,” Gowdy told Fox, “Or concede you are not interested in getting all the facts.”

While the committee, which now stands at 13 staff but should reach its target of 20 by September, is focused on a detailed timeline to identify gaps in the facts, Gowdy said he believes closed or private depositions of witnesses as opposed to open hearings would provide the most information.

“Five minutes [the time allotted each committee member in a public hearing] has proven time and time again to be an inadequate amount of time to get to the truth,”Gowdy explained. “I’m certainly not good enough in five minutes to unlock all the mysteries in the world. I might not be doing five hours but I would rather use whatever investigatory tool allows me the most amount of time with a witness or potential witness and I think that will be depositions as opposed to public hearings.”

Acclaimed actor James Woods tweeted that insomnia may prove to be a new common complaint among those in the Benghazi inner circle: