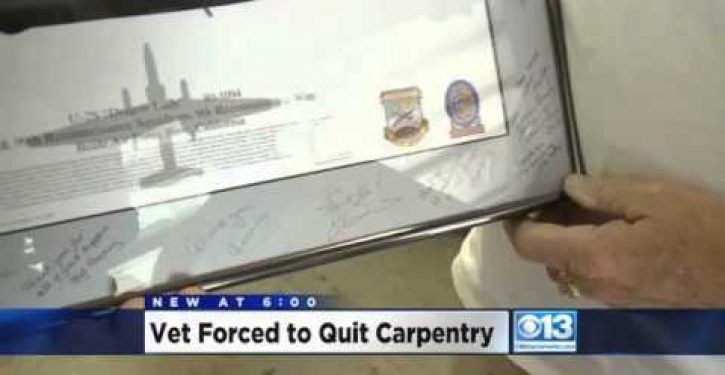 A California homeowners association has pulled the plug on a Vietnam vet’s home workshop, which has been dedicated solely to building furniture for military families at stationed at a nearby Air Force base.

After a full decade of providing his hand-built furniture for needy Airmen and women, the Lake of the Pines Homeowners Association handed Dennis Kocher his pink slip. If he refuses, he could be fined between $100 and $1,000, according to CBS Sacramento affiliate KOVR.

“I may not paint, sand, cut wood or screw on the property at anytime,” he told the station.

“Everyone who received my furniture or responsible for dispersing it gave me this gift,” he said, indicating a plaque. “And it’s something I’ll treasure forever. I don’t make a profit. The money I spend is my own money, my own time and talents and I build it to give to the Beale [Air Force Base].”

The association first approached Kocher two years ago. But the complaint then was that he needed a business permit. Although the activity technically isn’t a business — it actually costs him money — he nonetheless complied. This time the association has a new beef.

But the funny thing is, his neighbors actually support his efforts — no complaints there.

Although he stopped production for the time being, he hasn’t quit. He plans to argue an appeal at the HOA’s August 5 meeting — and he’ll have support from the senior master sergeant at Beale there as well.

“I’m going to keep that fighting spirit,” he promised. “I don’t give up.”

Watch the KOVR news clip below.