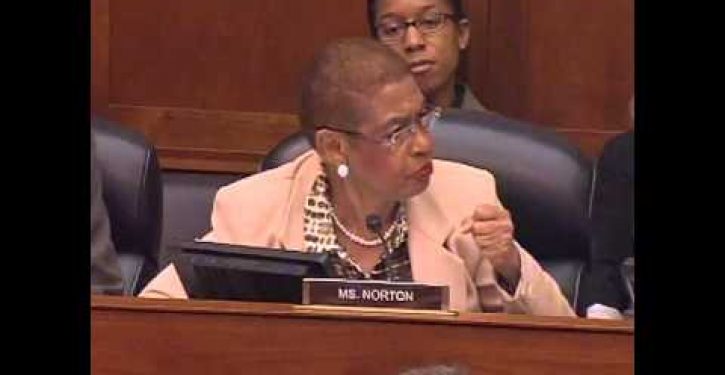 One of the hallmarks of separation of powers is a system of checks and balances, designed to prevent one branch of government from running roughshod over the other two. Indeed, that’s the purpose of the Oversight Committee — to provide oversight to see that it doesn’t happen.

The brouhaha resulted from the White House’s repeated refusal to comply with the committee’s subpoena of David Simas, Assistant to the President and Director of the Office of Political Strategy and Outreach. Issa has been ordering Simas’s appearance before the committee in order to testify about possible Hatch Act violations.

Although Issa hasn’t alleged any actual misconduct, that particular office has a history of Hatch Act violations, and Issa has attempted to question Simas for two weeks now, as Liberty Unyielding previously reported.

Holmes [Norton] was clearly down with that. She called Issa’s subpoena a “showcase fishing expedition.” She went on to argue that the Constitution’s separation of powers specifically gives the people who work directly under the chief executive immunity from subpoenas. “The president’s immediate advisor is not an agency and this is not a matter of policy,” she said, before going to further clarify that we “don’t have a right to know” everything that the administration does.

“I associate myself with your comments,” Cummings added, thus making it clear that he doesn’t believe the public has right to know what is going on inside the White House either.

As a delegate to the District of Columbia, Norton is a non-voting member of the House. Watch her rant below, via Oversight and Reform.

Video: Joan Rivers goes on pro-Israel rant
Next Post
Cartoon of the Day: ‘Use some restraint!’