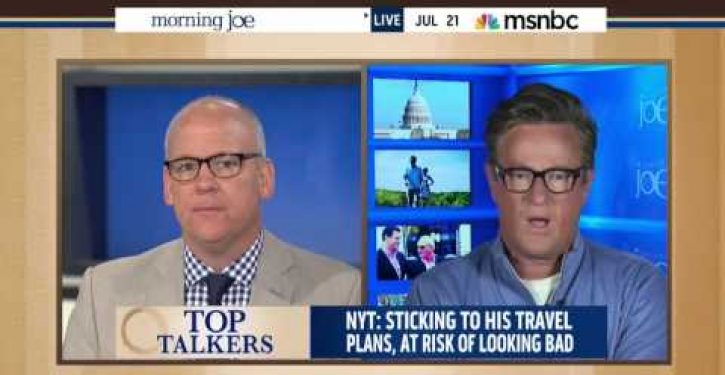 MSNBC’s “Morning Joe” Scarborough blasted President Barack Obama’s decision to follow through with his vacation plans in the midst of mounting international crises. He added that he should use Ronald Reagan as an example of what to do.

After the laughter died down, New York Times White House correspondent Peter Baker stuck up for the president. He said that Obama’s political people are “conscious that the optics can be bad,” and they’re “trying to find a balance between allowing the world to dictate his own schedule and not looking out of touch.”

New York magazine writer John Heilemann asked Scarborough what he would do if he were advising the president, “not on the policy, but on the politics.” Scarborough didn’t hold back.

He stated that Obama has to become more engaged in events taking place around the world.

I think it’s okay to do what Ronald Reagan did when flight 007 was shot down over Europe, 200 people died. He had just started a vacation. He immediately came home, he canceled fund-raising and all campaign events for ten days.

Scarborough added that the president is even getting flak from members of his own party.

Democratic congressman last week saying you’re holding three fund-raisers in Texas while there’s a humanitarian crisis on the scale of Katrina happening on your border.

Watch the exchange on this clip.

Secretary of State John Kerry apparently disagrees with Scarborough’s assessment. Kerry lashed out at Obama’s critics during his appearance on Sunday’s “Meet the Press”.

“I think the American people ought to be proud of what this president has done in terms of peaceful, diplomatic engagement.”

Which means, I suppose, that disengagement is actually engagement.

Without naming names, Kerry finished his harangue with a swipe at Obama’s immediate predecessor — George W. Bush. He criticized him for his “quick-trigger, deploying of troops, starting or engaging in a war of choice.”

Here’s a clip from that appearance.