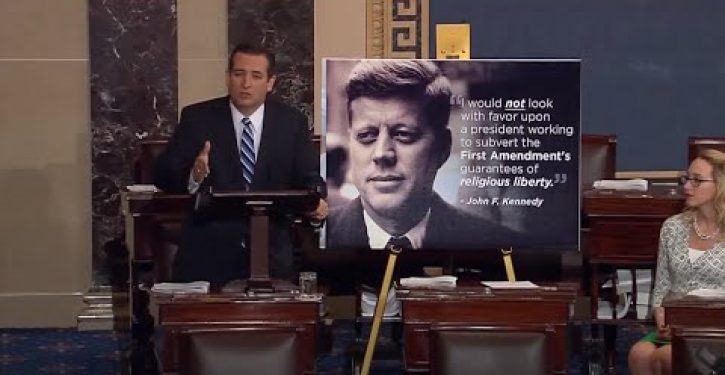 U.S. Sen. Ted Cruz, R-Texas, took to the Senate floor Wednesday to argue against a bill introduced to circumvent the Supreme Court’s Hobby Lobby decision. During the speech, he reasoned that the Democratic Party was turning the Bill of Rights into “a partisan matter” and asked when did it declare a war on the Catholic Church.

“The issue before this body is not about access to contraceptives,” Cruz said, contrary to arguments coming from the left. But it would chip away at the First Amendment and impose what he called “faith fines” upon Catholic religious organizations.

“The bill that is being voted on this floor, if it were adopted, would fine the Little Sisters of the Poor millions of dollars unless these Catholic nuns are willing to pay for abortion-producing drugs for others,” Cruz argued. “Mr. President, when did the Democratic Party declare war on the Catholic Church?”

Senate GOP thinks a woman’s boss should decide if she can have birth control. Aren’t they a day early for #TBT? #Not1914 #NotMyBossBusiness

#TBT refers to “throwback Thursday,” a day Twitter users share their photos and information that is a “throwback” to an earlier time.

The Protect Women’s Health from Corporate Interference Act was introduced by Sen. Patty Murray, D-Wash. It was designed as an end run around to the Hobby Lobby decision, which found that closely-held corporations are absolved from providing certain types of contraceptives as a part of their employees’ health care plans if doing so would violate their firmly-held religious tenets.

Perhaps I missed this, but I don’t recall the Constitution providing that Supreme Court decisions can be overturned Congress, yet that’s exactly what Murray was attempting to do when she introduced her bill. Perhaps she was just following the president’s lead. If he sees a law or Constitutional provision he doesn’t like, he either ignores it or changes it with his phone and his pen.

Also, contrary to Jarrett’s tweet, Hobby Lobby does not restrict employees of such companies from purchasing any contraceptive on their own. Other Twitter users were quick t correct her. Here are just a few examples:

Why is your nose not 12.5 feet long? #Pinocchio https://t.co/NgjRyWHT3a

Lies. Disgusting lies. We live in an upside down world. https://t.co/eVVqy44HUZ

I can’t get over how insane this tweet is. MT @vj44: Senate GOP thinks a woman’s boss should decide if she can have birth control.

Check out a lot more tweets blasting Jarrett by going to the Twitchy team.

In the meantime, I ran across the following, and can’t help but think it may be a photo pf Jarrett — in her early years. Or perhaps Sandra Fluke? You decide and let me know.