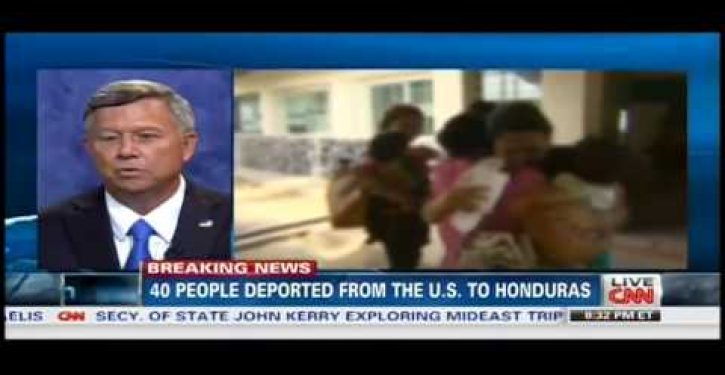 The Obama administration is dispersing thousands of undocumented aliens throughout the United States without providing the affected local and state governments information they need to protect their own citizens.

Nebraska Gov. Dave Heineman (R) told CNN’s AC-360° host Anderson Cooper that he only learned after the fact that approximately 200 illegals had been transported to his state:

That’s exactly right. I only learned last Thursday or Friday when Senator Johanns found out that the federal government sent 200 illegal individuals to our state. No mayor has been notified, I have not been notified. And we believe we deserve that notification.

He added that he was given no information about them whatsoever, prompting him and several other Nebraska politicians to write the Department of Health and Human Services, requesting basic information. In particular they want the names of the undocumented aliens, and the name, address and immigration status of each alien’s sponsor.

“This isn’t about partisan politics,” he emphasized, adding that his concerns are shared by Democratic governors. “I agree with the president — we will treat them humanely while they’re here, and then we should expeditiously return them to their country of origin.”

Watch the exchange below, via the Washington Free Beacon.

One enterprising person suggested a way to see that we “expeditiously return them to their country of origin.”

Texas Gov. [Rick] Perry accused the Obama administration of orchestrating an influx of illegal immigrant children from Central America into the US. Obama describes the children and other immigrants as a “humanitarian crisis” and has requested billions of dollars from tax payers to address the issue. “I wish I could take all those children home with me,” former Speaker of the House Nancy Pelosi said, epitomizing the attitude of congressional Democrats. We demand Obama and Democrats come up with a plan to establish privately funded housing in Washington and on the grounds of the White House to accommodate illegal immigrants. If an amnesty bill is passed by Congress wealthy Democrats and others should continue subsidizing poor and unskilled immigrants who will impose a burden on the federal budget.

As of Tuesday morning, it lacked over 93,000 signatures before the White House is required to respond.

Is Paul Krugman leaving Princeton in quiet disgrace?
Next Post
Another crashed hard drive impedes another investigation of administration wrongdoing