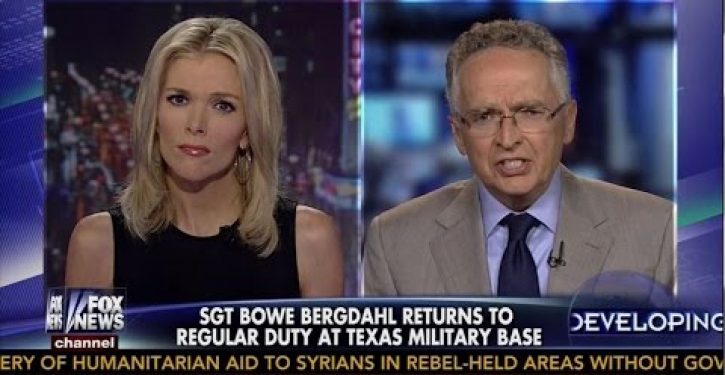 Fox News strategic analyst Lt. Col. Ralph Peters told Fox News host Megyn Kelly that the Obama administration is “on the verge of establishing a precedent that desertion in the face of the enemy is no big deal” with its handling of alleged Army deserter Bowe Bergdahl.

Peters was on fire during his Monday appearance on “The Kelly File,” stating categorically that fellow “military people are furious” about the situation and how the president is turning a “pathetic loser” into a “celebrity hero.”

“How about having sympathy with the soldiers who did their duty” Peters rhetorically asked the Obama administration. He defined them as those “who have lost limbs, who have brain damage, who are paralyzed, who suffer PTSD because they did their duty.”

He noted that at no time in any country’s military history has an accused deserter been “treated so well,” especially when “Bergdahl’s comrades believe he deserted.”

@ShannonBream @RichardGrenell this Bergdahl story is unbelievable. No one has interviewed him yet? And he’s fully recovered?

As we reported—> MT @CodyFNfootball: @EmilyMiller It’s correct, none of us have been contacted by the Army for the bergdahl investigation.

Full appeared on “The Sean Hannity Show” last night. Here’s that interview via Twitchy, which compiled all these tweets:

Twitter user Brian Norwood has an idea as to why those closest to the alleged deserter haven’t been interviewed. He tweeted in response to platoon mate Full:

@CodyFNfootball @EmilyMiller coverup in full effect…. cant have fearless leader look bad with the trade off

Coverup? In the Obama administration?

In Operation Fast and Furious, the IRS scandal, the VA hospital scandal, NSA spying, AP reporter phone tapping, Benghazi and all the rest, the procedure has been the same — stonewall, obfuscate and coverup. When these fail, destroy the evidence

In six weeks time, Bergdahl will be another “phony scandal.”

New report: Fuel economy savings show diminishing returns
Next Post
Study: People who claim to worry about climate change use more electricity than those who don’t