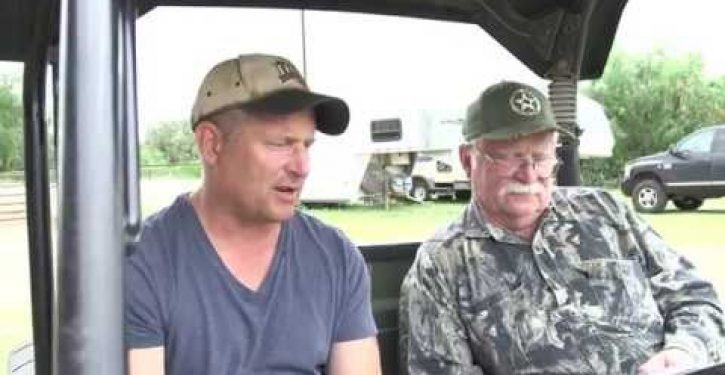 A South Texas rancher made a discovery near the U.S.-Mexican border that illustrates the most horrifying aspect of President Obama’s de facto open border policy — the infiltration of Islamic terrorists.

Ranch owner Dr. Michael Vickers discovered an Urdu-to-English/English-to-Urdu dictionary and phrase book on his land. Urdo is the official language of Pakistan, and is also spoken in parts of Afghanistan and India.

In other words, it ain’t just Central Americans making their way through. We’re being invaded by people — both good and bad — from all corners of the world.

Vickers’ property is enclosed by an electric fence, and he reasons that the book got dropped when its owner got jolted by the fence, according to The Blaze, which reported:

Vickers’ property line runs along Highway 281, just 4 1/2 miles north from the Falfurrias Border Patrol station. The station itself is about 70 miles north of the Rio Grande, the first highway checkpoint for vehicles coming from Mexico in an area known for heavy illegal alien and drug trafficking. Instead of moving through the checkpoint, however, Vickers said that up to 30 people cross his property every day to try to evade the Border Patrol. Years ago, it was only a handful a day.

The influx of people from terror-ridden countries in the Middle East and Africa was confirmed to The Blaze by a Texas Border Control agent.

“We have limited resources,” the agent told The Blaze under promise of anonymity.

It’s frustrating for all of us and there’s no doubt that we have OTMs [Other Than Mexicans] coming from Pakistan, Afghanistan, Somalia and other parts of the world that we are very concerned with — these guys won’t be turning themselves into Border Patrol like the family units or children. I expect we’ll see more the OTMs of special interest this year and next, now that they know they can get in easier and they won’t be turned back home.

The agent added that plenty of other items have been discovered along or near the border that clearly weren’t left by Latin Americans.

“We’ve found Qurans, prayer rugs and many other unusual items at the border that certainly raise concern,” the agent said.

Vickers actually discovered the dictionary on his property last year, but didn’t make it public until recently through documentary filmmaker Chris Burgard. In the following clip, Vickers and Burgard discuss the dictionary.

They keep their banter light in the video, even though what’s behind the dictionary’s discovery could be terrifying. America doesn’t have merely a humanitarian problem — it has a national security crisis.

Tweet of the Day: Hey, Obama, do your job!
Next Post
White House to Issa: Er, could we talk about this in private?