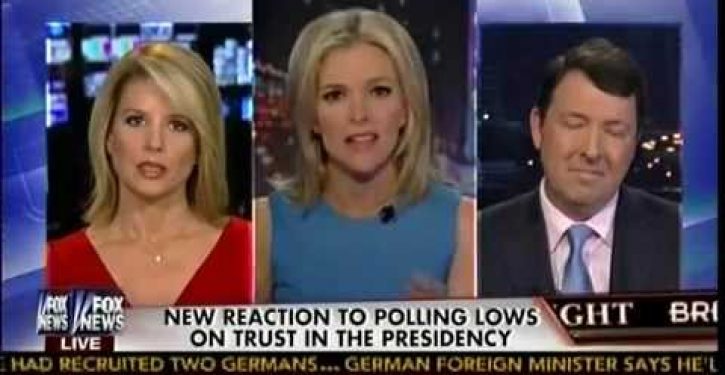 After a Fox News anchor blasted House Minority Leader Nancy Pelosi (D-Calif.), for claims she’d made about the Supreme Court’s Hobby Lobby decision, a left-leaning fact-check organization decided to investigate — and it found for Fox News.

Pelosi attacked the decision at her weekly media briefing, where she claimed the court’s male majority determined what reproductive choices women are allowed to make.

“We should be afraid of this court,” Pelosi insisted at Thursday’s briefing. “That five guys should start determining what contraceptions are legal.”

“Nancy Pelosi either doesn’t know what she is talking about, or is intentionally misleading you,” Kelly said, then adding that she was guilty of sexism. “Newsflash: All birth control that was legal before this decision remains legal today!”

Kelly also challenged PolitiFact.com, a liberal Tampa Bay Times project, to look into Pelosi’s statements. The fact checker found Pelosi’s assertions “false” late Friday, and Kelly made note of it on her broadcast that evening. Watch that segment of her show below.

We rate the claim False.

Politifact: Nancy Pelosi is basically a liar or an idiot. http://t.co/Fe1Ia91ONf

And then there was this gem:

@PolitiFact @WonderingWhyyy @megynkelly Ladies and Gentlemen, I give you Nancy Pelosi; pic.twitter.com/dm1iwqhUbS

Conclusion? Kelly is vindicated; her honor is secure. Also, PolitiFact should cover all of Pelosi’s weekly briefings.