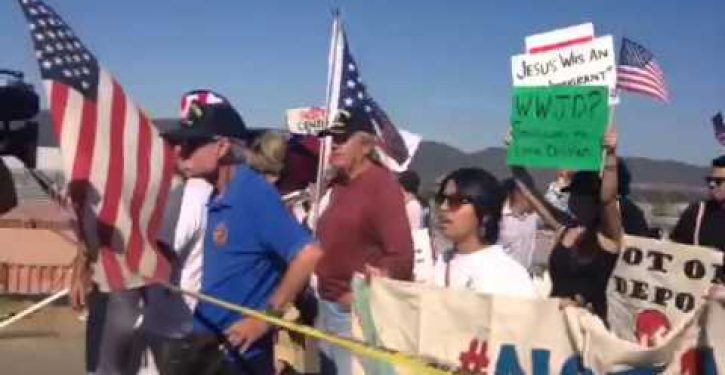 The CBS Affiliate in Los Angeles reported, “A protester was handcuffed and taken into police custody shortly after 9 a.m. It’s not yet known what prompted the arrest.”  No further details were provided.

If true, this would make a few radical progressives very happy:

“simplest thing is to arrest the mayor. these are paid by KOCH protestors” — Murrieta #Murrieta http://t.co/cwE01pWPBs

@WhiteHouse @BarackObama I’m disgusted that a small group of protestors in #murrieta were allowed to turn away buses. Arrest the protestors! — Kristil Sahlin (@zuzu71) July 1, 2014

It is too soon to confirm, but here is the tweet:

Update: According to the Los Angeles Daily News,

“At least one protester was arrested today outside the Border Patrol station in Murrieta today. The protester was seen calmly walking towards a police squad car, as demonstrators both opposing and supporting the federal government’s recent migrant policies lined a rural road and shouted at each other. Long sections of roadways near the Border Patrol station have been marked “no parking,” and both sides of the issue have been given assembly areas. But law enforcement officials have said a repeat of last week’s blockade of three buses, presumably carrying women and children, will not be allowed.”

Perhaps the protester strayed from the First Amendment area.

Update 2: A video has surfaced of illegal activists chanting “Deportations got to go.”

Evidently, the buses have not yet arrived.

The standoff continues in Murrieta. No buses yet. pic.twitter.com/FBMCrtVN8C

How many consecutive days have gasoline prices been over $3 a gallon?
Next Post
#Murrieta vitriol and anti-Christian sentiment on Twitter 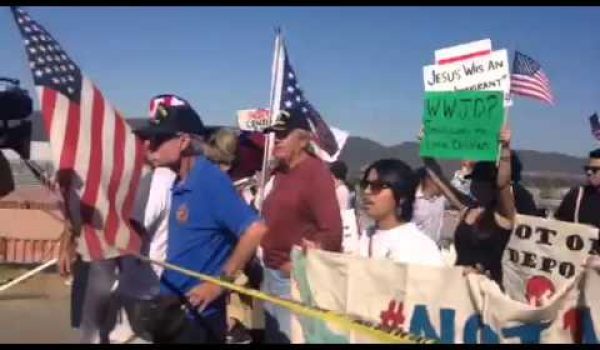