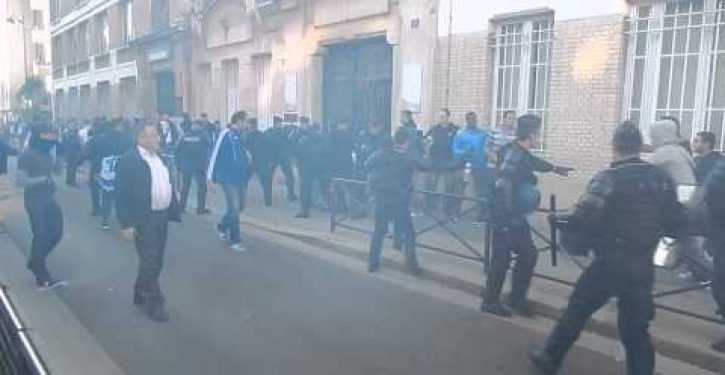 Sadly, the thing about these attacks is not that they are remarkable or rare; it’s that they’ve become so common.

Parisian Jews turned out on 19 June to rally for the release of three Israeli teens (one an American citizen) who were kidnapped by Hamas on 12 June near Hebron.  (See here for coverage of the Palestinian Arab reaction to the kidnapping.)

The teens are Eyal Yifra, 19; Naftali Frankel, 16 (the dual U.S.-Israeli citizen); and Gilad Shaer (16).  Ben Shapiro (among others) pointed out this week that with Hamas having joined a unity government with Fatah, which runs the Palestinian Authority, the United States is now funding Hamas and its terror-kidnapping arm, through our aid to the PA.

The “action” starts about 30 seconds into the video.  The French police respond quickly, and after a couple of minutes have the perp — who lobbed a fiery, homemade missile into the path of the marchers — wrestled down, and the march back on track.

For extended coverage of the Paris rally, see the longer video here (in French).

Obama’s ‘marine protected area’ expansion: On a collision course with national security?
Next Post
Cartoon of the Day: The media’s double standard on reporting scandals