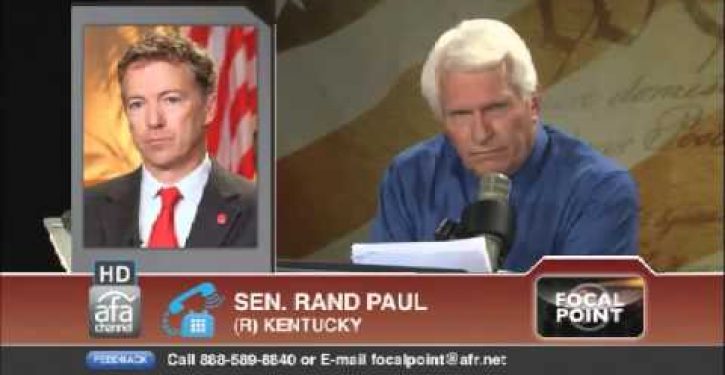 Sen. Rand Paul has suddenly become aware of facts that do not exist. “Immigrants are drawn to the magnet of free market capitalism here in the United States,” he wrote in an op-ed last week.

However, over half of Hispanics are literally telling us that they reject “capitalism,” and the two largest immigrant groups (Hispanics and Asians) are voting overwhelmingly for the more anti-capitalist of the two major parties.

By any measure, the Pew polling data is more accurate and reliable than Paul’s musings about why immigrants come here.

When Paul talks about what “immigrants are drawn to,” he does not cite to any research or even provide an anecdote. Neither he nor any other Republican can name a single city or state that became more conservative/market-oriented because of mass immigration or racial pandering. Even more disturbing, these people can’t name a single conservative party in any Western nation that has won more elections because of non-Western immigration. Paul’s only citation is “nation of immigrants.”

That’s part of the problem with Republican wishful thinking on immigration “reform”: no facts, no reasoning, nothing but blind faith that the GOP can make the ultimate racial pander pay off.  Paul is taking the exact same unrealistic, PC approach to immigration that Eric Cantor took.

The data show something about modern immigration that immigration “reformers” – particularly the libertarian ones – are oblivious to. This obliviousness is odd, given Milton Freidman’s immigration maxim: “It’s just obvious you can’t have free immigration and a welfare state.” Last year, Paul himself said, “I do agree with Milton Freidman. You can’t have open borders in a welfare state.” Something changed, and today Paul appears to have been visited by an apparition: masses of libertarian illegal immigrants.

Where did Paul go wrong? There is a difference between immigrating to a country because you can get more money there and immigrating to a country because you are ideologically committed to an economic model. Sen. Paul would have to be extremely idealistic, or blind to the facts, not to see the difference between the two, and the difference matters immensely. The bottom line is that any given immigrant could desire both a private-sector job and the benefits of welfare.

Conservatives insist that welfare and regulation hurt economic growth. But there is an important caveat: an economically depressed America, with an expanding welfare state and Democrat control, may still provide a better standard of living than what many immigrants experience in a country like Mexico, for instance. California is a perfect example of this perverse outcome, where immigrants seeking jobs have turned the state into a leftist bastion. There is no real inconsistency between wanting a job and promoting the welfare state. There is a tradeoff between equality and efficiency, but one can easily work a private-sector job and desire income supplements in the form of welfare. The relative economic hardship of the home country makes the American welfare state a comparative gain for many immigrants, even if the welfare state constricts the American economy to some degree. If and when America becomes less free market-oriented, the immigrant still obtains comparatively greater benefits from our economy overall. This is why it is unsound for Paul to project his libertarian ideology on to others. It may be hard for many conservatives to accept, but it is theoretically possible that immigrants are not always drawn to what conservatives think is the optimal economic model for America.

To illustrate how off-base Paul and the “immigration reformers” are, consider a hypothetical family from Mexico who come to America illegally. They know they can make more money here, and most people like having more money. Since we’re not defending our border, the family crosses. The family is used to Mexican standards of living. So they will work for lower wages than most Americans, and even an economically depressed area of America will provide them with more opportunities than what they had at home. It is not the free market they’re looking for; it’s a bigger paycheck. Welfare supplements a paycheck.

Now, let’s say some of the family members eventually vote. They can choose the party of high spending and welfare, or they can choose the party that keeps talking about capitalism and “old dead white men.” Capitalism and the old dead white men generally will not resonate with Mexican immigrants, or with people who often consider themselves “Mexican, Cuban, Puerto Rican, Salvadoran or Dominican,” etc., even though they are American citizens. This is especially the case when the immigrant believes that the U.S. “stole” the southwest from Mexico. Thus, the hypothetical immigrant or recent immigrant voter frequently chooses the welfare party. To be sure, this voter hears the “almost exclusively white” conservative party warn about the dire long-term consequences of too much government. But if the voter doesn’t feel the pinch of taxation, and actually benefits in the short term from the welfare state, then he is not going to heed warnings about future macroeconomic harm.

From the standpoint of short- and medium-term economic interests, the immigrants from poorer countries are – plausibly – subjectively better off with the welfare state, even if that welfare state leads to a declining American economy. Worse yet, because there will be wave upon wave of such immigrants, there will always be a new cohort of people who are glad to work low wages and take welfare. Under current immigration policy, we are constantly importing inequality.

Furthermore, if one believes, as libertarians and conservatives do, that embracing the welfare state is inconsistent with promoting free-market capitalism, then it is hard to escape the conclusion that immigrants are rejecting capitalism in startling numbers. Forty-three percent of immigrants who have been in America for over 20 years are on some form of welfare, which is a higher percentage than immigrants who have been in the U.S. for less than five years, according to an analysis of Census Bureau statistics conducted by the Center for Immigration Studies. This means that the longer immigrants remain in America, the closer they bond to the welfare state. As one example, Harvard economist George Borjas concludes that Hispanics are “[a]ssimilating into the welfare system.” Fifty-seven percent of Mexican immigrants receive some form of welfare, compared with 6% of U.K. immigrants.

Seeing as how Sen. Paul’s state of Kentucky has one of the lowest percentages of immigrants of any state, he will have to understand if few people take his assessments of contemporary immigration seriously.

There’s nothing wrong with big tents, outreach (as opposed to pandering), or positive political thinking. But past immigration is no indication of present or future immigration; the melting pot is completely broken today. We’ve got to stop expecting assimilation when all of the factors that once created assimilation are now absent. If we continue to elect leaders that are as ill informed on the immigration issue as Rand Paul, then we deserve the consequences that are certain to follow.