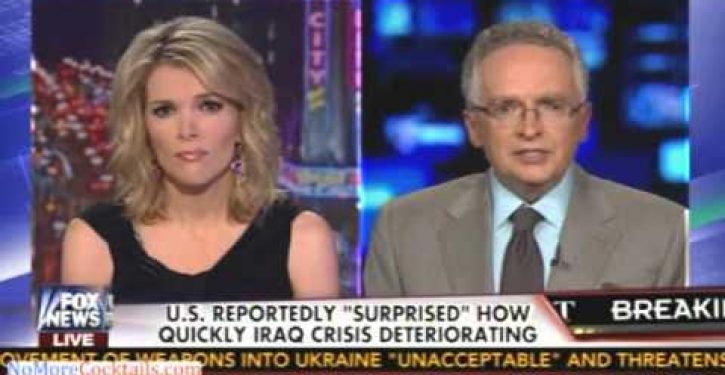 Astounding words are being reported out of the Obama administration.  It is possible to frame them in a larger context of geopolitical and philosophical analysis about the current situation.  But it isn’t actually necessary.  What makes them astounding comes as much from their “first-order” meaning as from anything deeper or more deductive.

All we need to know is the basic facts.  The consortium of jihadists fighting under the ISIS banner in northern and western Iraq has taken over the city of Mosul and started a drive to the south toward Baghdad.  As of this writing, the advancing force is reportedly some 50-60 miles north of Baghdad.

Although Iraqi government forces fled precipitately from the ISIS attackers in Mosul, government troops are said to be mustering in Samarra – along the avenue of approach from Mosul to Baghdad on the Tigris River – and in Baghdad itself.

In case it’s not clear, this doesn’t mean the Iraqi army will probably protect Baghdad.  It means there will probably be a big, bloody fight of some kind in Baghdad – and that its outcome will be uncertain.

Baghdad is really too much for ISIS to bite off all at once, if the government troops perform even just a little better than they did in Mosul.  ISIS won’t fling itself uselessly into whatever counts as the Iraqi forces’ position of strength.  What ISIS may well have in mind is positioning forces on the outskirts of Baghdad, ready to pounce, and softening the city up with days of disruptive asymmetric attacks, on civilians, police and security leaders, and infrastructure, such as water and power.  Taking over microwave towers and power stations is a likely tactic.  Vicious, brutal intimidation of the populace will be the mode of advance.  (See here – strong warning; graphic – to view recent images posted by ISIS jihadis of “population intimidation” in the Mosul area.)

It doesn’t take brilliant insight or analysis to see this coming.  It may not, strictly speaking, be inevitable.  But there is literally nothing being prepared or put in place that would reliably prevent it.

Even the introduction of Iranian troops into Iraq, confirmed in the last 24 hours, is not necessarily a measure to decisively protect Baghdad or the Maliki government.  The force level described so far, perhaps between 2,000-3,000, would be inadequate to that task.  The Iranians themselves have emphasized the goal of protecting the Shia holy sites at Karbala and An Najaf, which lie south of Baghdad.

That may or may not be a downpayment on a bigger commitment.  It’s very possible the Iranians are hedging their bets, determined ultimately to preserve their political connection with the Iraqi Shias, even if the Maliki government itself doesn’t survive.  I wouldn’t predict with certainty right now how much the mullahs will risk on Maliki.  Reports suggest their forces have crossed into Iraq in at least two places, including central Iraq; their machinations behind the scenes are assuredly more robust and extensive than what they’re advertising in public.

Iraqi Kurds in the north, meanwhile have already taken over the city of Kirkuk.  The Iraqi central government’s authority in northern Iraq has basically collapsed.

In this situation, there is no possible explanation for not evacuating at least the non-essential personnel from the U.S. embassy and consulates in Iraq.  It is understandable and appropriate for the ambassador and a skeleton staff to remain, at least as conditions have unfolded up until now.  And it would have been conventional for the embassy and consulate staffs to keep enough personnel on the job over the last week to deal with American civilians in Iraq who are suddenly concerned about getting out of the country.

But a normal diplomatic profile in the face of the upheavals in Iraq would look very different from what we seem to be seeing, which is a complete absence of special preparations – in particular, preparations involving the U.S. military – to get our people safely out.

Given this background, two videos posted in the last 24 hours are informative, and alarming.  The first is from Megyn Kelly’s Fox News show on Friday, 13 June.  In it, she talks with retired Army Lieutenant Colonel Ralph Peters, a Fox military analyst.

There is a very good chance our embassy will be attacked before Obama does a thing.

And he conveys this appalling message:

I’ve been hearing from friends inside the system.  They’re horrified.  They’re mortified.  The intelligence community has been briefing Obama and his team, his NSC team for months on this, Megyn, and a friend of mine was just distraught when he spoke to me; he said, We still – and this is as of today – we still cannot convince the president that this is serious.

Then comes this exchange at the end (emphasis added):

Kelly:  We are getting reports out of the Pentagon tonight that those in the embassy – that some are very concerned about their own safety…that they are not being evacuated.  That the way it’s been put is that it’s too politically sensitive to evacuate them.

And one reason for that is the growing body of evidence that ISIS has it in for America.  I wrote two days ago about the ISIS video (which was posted in January) in which ISIS leader Abu Bakr al-Baghdadi issued a specific warning to America:

This is a message that we address to America.

You should know O protector of the cross, that the proxy war in Ash-Sham will not benefit you just as it has not benefited you in Iraq, and you shall soon be forced to be in direct confrontation by the permission of Allah, and the sons of Islam have been waiting for this day.

And, as noted in last night’s post, U.S. officials have known about the video (a State Department officer briefed it to Congress) since at least early February.

Widely reported today was a story recounted by the former Army commander of the Camp Bucca detention facility in Iraq, where al-Baghdadi was held for several years before being released to the Iraqi government in 2009.  According to Colonel Kenneth King, al-Baghdadi turned to the Americans when he was departing and said, “I’ll see you guys in New York.”

This probably seems more threatening in hindsight than it did at the time.  But the tenor of the latest flight of rhetoric from ISIS, which was posted on 12 June after the fall of Mosul, is unmistakable right out of the gate.

MEMRI translated the clip, in which an ISIS leader whips up a crowd of supporters in Mosul (h/t: Robert Spencer at Jihad Watch).

What’s notable is what the ISIS orator makes a point of: alluding to America in his recitation of the ISIS victory.  (Emphasis added.)

Masked ISIS commander, waving a rifle: By Allah, we embarked on our Jihad only to support the religion of Allah.

Crowd (capturing the events on video with their smartphones): Allah Akbar.

ISIS commander: We have defeated the Americans and their allies…

ISIS commander: Allah willing, we will establish a state ruled by the Quran and the Sunna.

This all seems like it can’t mean what it sounds like:  that a real, catastrophic upheaval is developing in Iraq, and probably the greater Middle East – one that will place Americans along with millions of other people in grave peril – and the U.S. administration is doing nothing urgent or proactive to even prepare for it.

But it would be very dangerous to rely on that complacent assumption at this point.  Given the simple facts to date, there is no explanation for the lack of observable action by the Obama administration.  There’s no secret magic going on that we can’t see: nothing that would mean a rabbit will be pulled from a hat at some point.  This is real. 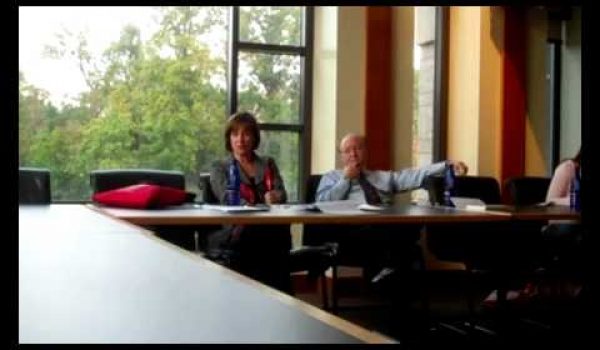 AP on IRS: No ‘evidence’ of outside pressure to target conservatives
Next Post
Tweet of the Day: Palestinian people ‘party’ over kidnapping of Israeli teens