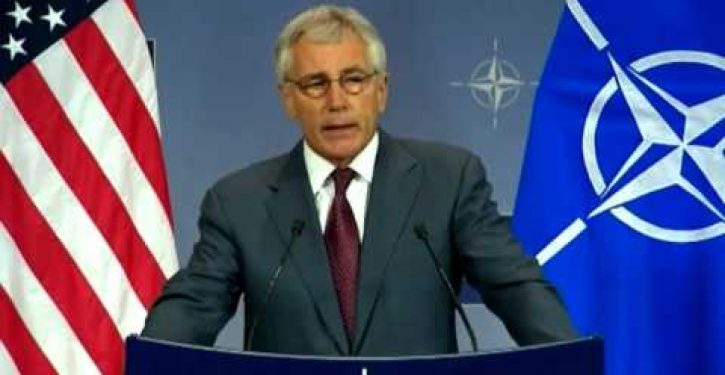 Defense Secretary Chuck Hagel said today that it is “unfair” to the family of Sgt. Bowe Bergdahl to “presume anything” about his disappearance, according to a video posted on the Pentagon’s YouTube channel.

Hagel, addressing the numerous claims by those who served with him that Bergdahl deserted his post while serving in Afghanistan in 2009, said,

“Until we get facts, until we have – as Secretary of the Army McHugh noted – a review of all the circumstances, Uh, it’s not in the interests uh, of anyone – certainly not, I think, uh, a bit unfair to Sergeant Bergdahl’s family and to him, uh, to presume anything. We don’t do that in the United States.”

With members of Bergdahl’s platoon actively defying nondisclosure agreements, the White House administration has been in full spin mode, even going so far as to attempt to discredit these heroes, as reported at RealClearPolitics. State Department spokesperson Marie Harf gave a clear impression that Bergdahl’s peers did not know what they were talking about.

As reported today at the Examiner, the author spoke exclusively with one soldier who served with Bergdahl. He claimed that not only did the missing soldier desert his post, but “evidence” was revealed showing that Bergdahl was an “enemy combatant.” The story from the unidentified source is one of many from soldiers who have first-hand knowledge of the circumstances surrounding Bergdahl’s disappearance. His entire (heartbreaking) account can be found at Tavern Keepers.

Teen who clocked another student after queefing during bus sex cops plea
Next Post
Picture of the Day: Surrender without honor