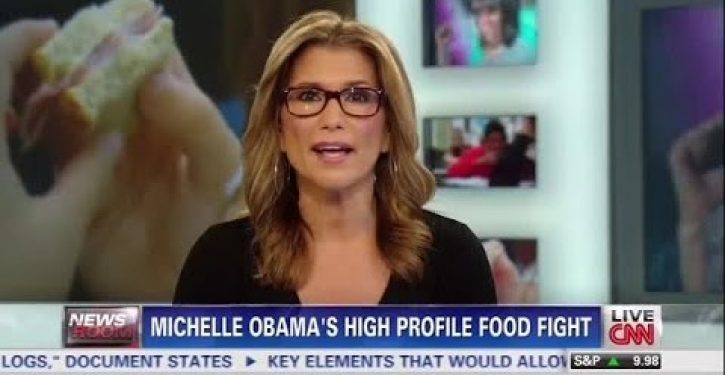 Since her husband’s inauguration in 2009, First Lady Michelle Obama has stated that one of her top priorities is to take the lead in the nationwide fight against childhood obesity. Yet with the passage of time, the effectiveness of her crusade and what exactly her role is in government very well may have spun out of control.

As reported by CNSNews, there have been increasing pushbacks against Mrs. Obama’s efforts. CNN reports, moreover, that the First Lady believes she has a power that the Constitution reserves expressly for the Chief Executive … and the network seems to believe it, too.

Using the White House’s example of what’s been tagged hashtivism, the Twitter handle of #ThanksMichelle has been circulating less than complimentary photos of what CNSNews.com’s Barbara Boland has referred to as “skimpy, stomach-turning school lunches.” To add insult to injury, Boland reported that the Washington, D.C. private school the Obama daughters attend has a lunch menu that has more in common with Maîtres de la Gastronomie than with Lunch Lady Doris.

As cited by Boland, Sidwell Friends School, which the first daughters attend, has been rated as having the #1 School Lunch Program by The Daily Meal website. With menus prepared by chefs, Sidwell Friends offers students:

Cuisines you’d never dream of show up on the menu here, such as an entire lunch of Brazilian delicacies like feijoada, caldo verde soup, all-natural chicken with coconut milk, and mango and pineapple with lime and mint. There’s a soup every day, like borscht, creamy spinach soup or Tuscan white bean, and creative dishes like the Creole caprese salad or hot and sour Cajun gumbo served on ‘Fat Tuesday.’

Long considered one of the premier private schools on the planet, Sidwell Friends isn’t exactly meant for those of the middle or lower economic classes. According to its official website, tuition for their Lower School is a hefty $35,264 per school year per child. That amount does include the costs of the hot lunch and textbooks. Slightly more expensive is the cost of their Middle and Upper Schools at $36,264, which excludes includes lunch and textbooks.

While giving a speech on the importance of healthy meals being offered to the nation’s schoolchildren, CNN showed a brief video clip where Obama stated,

We can all agree that in the wealthiest nation on earth all children should have the basic nutrition they need to learn and grow and to pursue their dreams.

Cutting back to the studio, the renowned network anchorwoman stated quite matter-of-factly:

That was Mrs. Obama back in 2010 when she signed the Healthy Hunger Free Kids Act into law.

Sarah Silverman to Bill Maher: Unborn babies are ‘just goo’
Next Post
Who is racist? The answer implicit in this timeline might surprise you