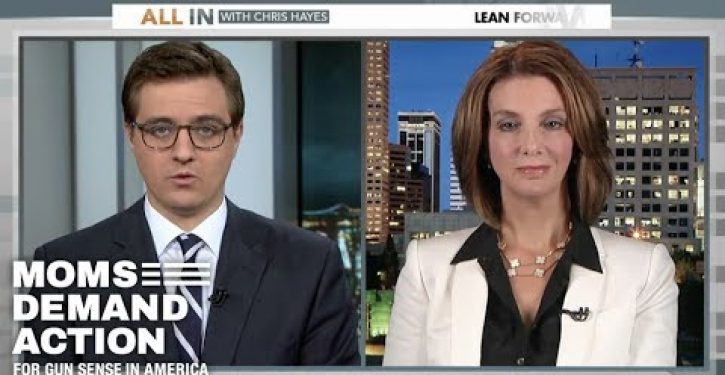 Shannon Watts, founder of the anti-gun advocacy group “Moms Demand Action for Gun Sense in America,” has been claiming vaguely that that people have been driving by her house, acting intimidating.

In an oped Thursday at MSNBC, Watts asserted that some of her opposition “have even gone so far as to drive by my home address, an apparent attempt at intimidating me into staying silent.”

How does she know who these people are? Did they point guns at her house? Did they throw rocks?

“In recent months, the vitriol coming from the other side has reached new levels of concern.”

She was doubling down on statements she made during a particularly ridiculous segment of MSNBC’s “All In with Chris Hayes” earlier this month, titled “Gun Bullies.”

Hayes mentioned that Watts has been a “target of gun rights extremists” and asked Watts [around the 4:00 mark in the video linked below] about threats that she receives as a vocal anti-Second Amendment activist. Watts agreed that she “absolutely” gets threats. “You know, you name it. Twitter, Facebook, email, phone, letters to my home, people driving by…”

Watts: “Just…looking at my house and what my address is and in general being intimidating.”

She did not go into further detail.

“In my opinion, threatening the opposition is cowardly and unAmerican. It’s a way to circumvent Democracy. They want to silence our votes and our voices…” Watts said. “We cannot allow this fringe to become mainstream.”

Open Carry demonstrations have never once led to violence.

Watch the segment below.