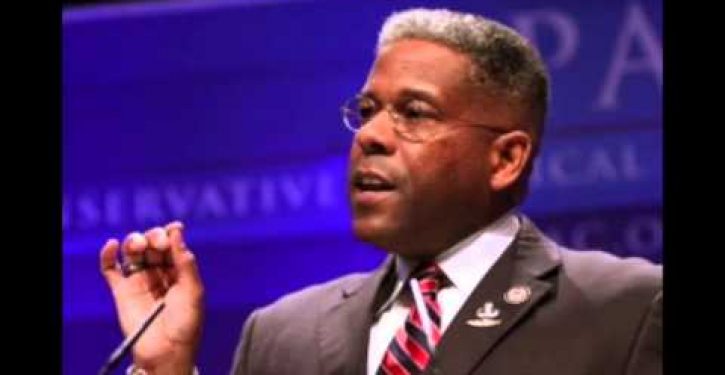 While appearing on Wednesday’s edition of AM 870′s “Morning Answer,” Col. Allen West told Ben Shapiro that he is considering a run for the White House in 2016 out of respect for those who have asked him to run.

“As I was doing the motorcycle ride across the country and wherever we stopped, fuel stop, overnight stop, people would come up and they would ask me that question,” he said. “And it would be very disrespectful and dismissive of great Americans if I did not step back and take the time to consider it and pray about it and talk about it with close confidants, so that is what I’ll do.”

West, however, warned that while he’ll consider a run, there is no guarantee he actually will throw his hat in the ring.

“Am I considering it?” he asked. “I am considering it. That does not mean I am going to jump it and do it, but in respect to those people who are so very kind and believe that I have that level of capacity and capability, that’s what I have to do for them.”

In 2010, West became the first African-American GOP congressman from Florida since 1876. Two years later, he narrowly lost to Democrat Patrick Murphy in a contest fraught with allegations of voter fraud and what some call questionable practices by local election officials.

West is not considering a rematch this year, but he remains a favorite with the Tea Party.

Predictably, the liberal hate machine spun into action upon hearing the news. Liberals at the far-left hate site Democratic Underground, for example, called West a “joke of a human being” and a “crazy nut case.”

Earlier in the week, West hammered the Obama administration with a blog post suggesting the focus on kidnapped Nigerian girls is intended to distract from the scandal surrounding Benghazi, a suspicion also held by others.

“Consider all the scandals facing the Obama administration, especially Benghazi and the Select Committee, which Rep. Nancy Pelosi referred to as a ‘political stunt,’” he wrote Monday. “Really? Four Americans die, we’re told it was because of an anti-Islam video, no one has been ‘brought to justice’ and THAT is a phony scandal and a political stunt?”

West has remained outspoken on many issues since his failed 2012 run, and many conservatives say they would love to see him run, even though it would present a difficult choice if Sen. Ted Cruz, R-Texas, also joins the race.

A post at The Right Scoop put it this way: “I must say though Allen West would present the left with their biggest problem, primarily because he is a black conservative. And that is something I would love to see play out.”

Boehner: White House SO does not have commitment from me on amnesty
Next Post
Undergrads: Celebrating ‘hump day’ with a live camel would be ‘racist’