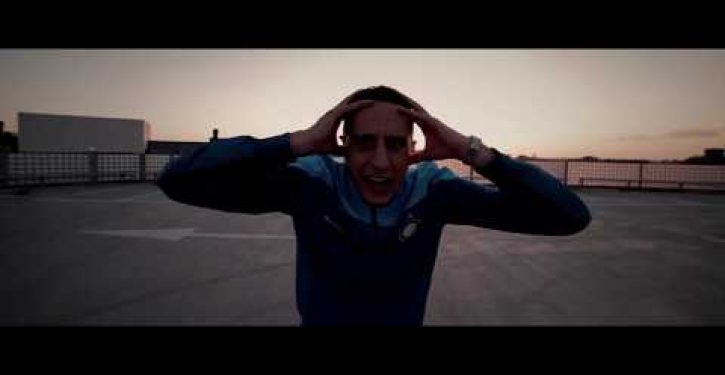 He calls himself Ismo. His real name is Ismael Houllich, but you’ll probably think of a more fitting name for him after you hear about his “music.” The Blaze writes that one of his songs (titled “Eenmans,” or “One Man’s”) contains the lyrics “I hate those f**king Jews more than the Nazis,” “don’t shake hands with f**gots,” and “don’t believe in anything but the Quran.”

The news service Jewish Telegraphic Agency (JTA) reports that Dutch police are investigating after a gay citizen filed a complaint that the lyrics incite hatred.

The Netherlands news site Algemeen Dagblad reported on Friday that a 19-year-old resident of the city in which the video clip was filmed named Lars Hobma filed the police complaint which prompted the investigation.

So what does Ismo have to say for himself? He insists it is a bad rap (pun intended). From a statement he released to the regional radio station Omroep Brabant:

They are trying to twist my words against me. I don’t hate all Jews. I hate only Zionist Jews that made Palestine smaller than my neighborhood.

You sort of get the sense that liberals in the U.S. would have no beef with Ismo if it weren’t for his hatred of homosexuals, though even there he claims once again that he is being taken out of context:

It all depends on how you interpret the song. By ‘f**gots’ I didn’t mean homosexuals.

Sooo … he is opposed to the British term for “cigarettes” or “a bundle of sticks and branches bound together.”

Ismo is not the only Dutch Muslim rapper whose racist, hate-filled lyrics have received public attention. Another, who answers to the name of Hozny, produced a “wishful thinking” video depicting the killing of anti-radical Islam politician Geert Wilders. After the video debuted in March, the International Business Times wrote:

In the video …, which is interspersed with clips of Wilders and photos of Hitler, a politician in a cheap blond wig is kidnapped by men in black ski masks. The video ends with the politician tied up and on his knees as the men point guns at his head.

Both videos may be viewed below. Warning: Graphic language and/or violence.