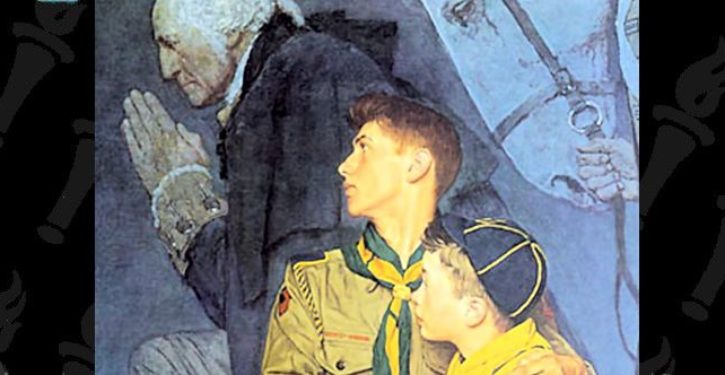 I have to hand it to Democrats. They are undoubtedly the World Heavyweight Champeens of what decent folks refer to in polite company as “historical revisionism.”

Case in point: The “crowing cock” logo isn’t something from 150 years ago. Oh, no. It just happens to be the former logo of the Alabama Democratic Party. How former? It was dropped in … wait for it … 1966.

Citing “the need for Negro voters and the surge of Republican Party strength in the state,” the Dems finally changed their logo at a time when many of us reading this were alive.

But I digress. We knuckle-dragging, mouth-breathing conservatives can call this revisionism for what it really is: Lying.

To maximize the hypocrisy and minimize the rhetoric, I’ll just hit the Dems high(low)lights since the the onset of the United States becoming a true world power.

As members of the Jackass Party continue to pillory Republicans, especially Bush-Cheney, for locking up terrorist scum in Guantanamo Bay (when we all know they should be shot in the back of the head, then fed to random Caribbean sharks and feral pigs) I ask why did Frankie absolutely and totally take a rather large dump on the Constitution of the United States of America?

More to the point, isn’t it amazing that the Democrats conveniently forget that Roosevelt imprisoned 110,000 loyal Americans of Japanese ancestry during World War II?

So what were these tens of thousands of Americans guilty of … other than being of Japanese ancestry? Er, nothing.

But nonetheless, it must have been Bush’s fault.

Yes, it’s us wicked conservatives that commit all the atrocities and war crimes. At least that’s what the Dems hammer home.

Yet they develop amnesia when it’s pointed out that the only world leader to ever use nuclear weapons in combat was a Democrat; Harry S. Truman.

Yes, the same Truman that got us into the Korean War.

Did you know that the Korean War lasted only a third as long as Viet-Nam, but we lost almost as many troops. It was that bloody.

Somehow, it must be Bush’s fault. Oh, it took a Republican president to stop the shooting in Korean, just don’t tell a Democrat that.

Who was it that ordered a wiretap of Martin Luther King’s telephone? Eisenhower … Nixon?

Promise you won’t freak-out on me — it was President Jack Kennedy’s Attorney General, Robert F. Kennedy. And you’ll never guess who it was that opposed the wiretaps; the big ol’ meanie J. Edgar Hoover.

But if you’d like to know what prompted over 59,000 Americans being killed in Southeast Asia, sources as diverse at the Cato Institute to The New York  Times essentially agree – the Viet-Nam War was based on a lie.

But that was perpetrated by a Democrat, so let’s all look the other way and keep moving along.

Oh, does anyone recall that it was an evil Republican that ended the Viet-Nam War? Just don’t ask a Democrat.

Please don’t misunderstand me, starting it was Bush’s fault, not ending it.

If being an incompetent buffoon was painful, Jimmy Carter would have been dead long ago. ‘Nuff said.

Sorry I broke it down Big Bird-style, but I figured there still may be a pouting Democrat or two still reading this.

Nixon took heat for covering up the break-in of a Democratic Party office.

Obama’s wire tapped an entire nation … and nobody seems to give a damn.

As the French ambassador to Russia, Joseph de Maistre penned in 1811:

Toute nation a le gouvernement qu’elle merite. (“Every nation has the government it deserves.”)