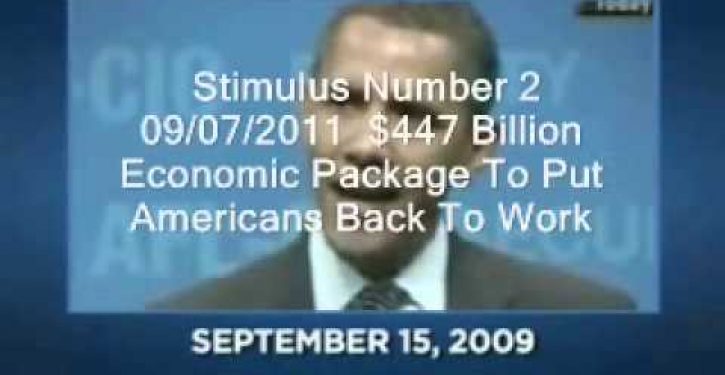 The president has long been fond of claiming that his proposals won’t cost American taxpayers “a dime.” A YouTube compilation here suggests he has made this promise at least 29 times, one of which pertained to his health care law. For patrons of a new Los Angeles restaurant, the president’s promise remains true — so long as the final tally for their meal comes in at under $3.33.

The restaurant, named Republique, opened last November to largely positive notices. In a pre-review, the Los Angeles Times enticed foodies with the promise of “pastry-topped escargot, caramelized-onion-and-bacon tarte flambee, and steak and moules frites. Long boards (some so long, they have to be carried by more than one server) bear house-made charcuterie, and from the rotisserie come Mary’s organic chickens with baby kale and fingerling potato gnocchi.”

The one thing missing from the Times write-up is the advice at the bottom of diners’ bills noting that “a 3% will be added to each guest check” to “procure health & medical benefits for our entire staff.” Larry Mantle of Southern California Public Radio quotes managing partner Bill Chait as explaining:

We knew that we wanted to offer the opportunity to get everybody into the health insurance pool….The problem is the structure for health care really makes it very difficult to insure part-time people… [W]e concluded that the most transparent and effective way to do it was to have a charge that basically was illuminated to the guest as opposed to one that is buried inside of the cost of the food.

In the interests of full disclosure, the restaurant advises customers who are offended by the surcharge to deduct 3% from the tip they would otherwise leave.

In the meantime, Health and Human Services Chief Kathleen Sebelius was in Orlando on Monday, where she was asked about last week’s CBO report, which indicated that Obamacare is a job killer. You can watch her response in this Fox News video, beginning at 1:03.

A footnote about Republique: The Times notes that the restaurant “serves crispy pork rinds.” Doesn’t offering this least healthiest of dishes to its customers seem at least slightly hypocritical for a restaurant that calls its surcharge a “Healthy LA tax”?