Men love darkness rather than light, because their deeds are evil. (John 3:19)

Woe to those who go to great depths to hide their plans from the Lord, who do their work in darkness and think, “Who sees us?  Who will know?” (Isaiah 29:15)

It is with a heavy heart that I write this.  What is reported here will surprise some people, but will not surprise others.  The events will shed, on the last few days in our republic, a light different from the spotlight directed by the media.  If we see the events clearly, we may realize that our focus has been misdirected.

Like most Americans, I think, I assumed it was inevitable that the Senate would vote to increase the so-called national debt “ceiling” this month, once the House did.  There might or might not be legislative shenanigans, but there would be a grudging vote to authorize more debt.  And so there was.

Ted Cruz famously irritated his colleagues – and much of the putatively conservative media – by “forcing a recorded vote” on Wednesday to raise the debt ceiling.  What he actually did was force the Senate to break a filibuster to pass the debt-ceiling increase.  The basic legislation for the debt-ceiling increase could have been passed with only a simple majority, which the Democrats have the seats to muster without any Republican help.  But breaking the filibuster, which takes 60 votes, required Republicans voting with Democrats.  What Cruz insisted on was having those votes recorded.

Here’s what most Americans probably don’t realize: the Senate Republicans who voted with the Democrats to break Cruz’s filibuster went to extraordinary lengths to try to keep their voting secret – against the normal practices of the chamber.  They didn’t think their actions would stand the light of day.  They wanted to be able to break the filibuster without voters knowing which ones of them had done it.

As lawmakers voted Wednesday on must-pass legislation to increase the government’s debt limit, they dropped the parliamentary equivalent of a curtain on the voting as it was in progress.

Typically, roll-call votes in the Senate play out in a very public manner. People watching from the galleries or tracking action from afar via C-SPAN can watch democracy unfold in all its messy wonder.

Each senator’s vote is announced by the clerk; each time a senator switches sides, that’s announced too. Onlookers can keep a running tally of how it’s going.

But not this time. Fifteen minutes into the vote, as captured by C-Span cameras, the tally clerk rose to recite the vote. A Senate aide alerted Sen. John McCain, R-Ariz., one of the six Republicans who later switched his vote from “nay” to “aye.” McCain intervened, and the clerk sat right back down. “Would you …” McCain said before the live microphone cut off.

According to Taylor, McCain’s staff later said he did not intervene to shroud the progress of the vote in secrecy.  Nevertheless, it was shrouded.

Skittish Republicans … knew the Democratic-backed legislation couldn’t move forward without at least a few GOP votes, but none of them wanted to be left hanging out there alone on what could be a politically treacherous vote.

Whatever the reason, they kept the public in the dark while they worked things out. A Democratic spokesman later explained that Republicans requested the clerk stay silent so it would be easier for GOP senators to switch their votes.

No more announcing each individual “yea” and “nay.” The running tally was known only by a handful of insiders.

The vote itself took a very long time, presumably because of the arm-twisting involved to get the Republican votes needed to pass 60.  As we know, it eventually got done.  In fact, six additional Republicans switched their votes in solidarity with Mitch McConnell, who finally stepped to the microphone, with John Cornyn, to break the filibuster with 60 votes.  The vote to break the filibuster ended up at 67-31.  But there was confusion in the chamber as to whether McConnell and Cornyn had actually put the tally at 60 – because the vote wasn’t being tallied publicly.

That appeared to put the tally at the required 60, but no one could be positive.

Had a Democrat skipped the vote to get out of town ahead of a looming snowstorm? Did the press gallery staff members who unofficially record each tally as a service to the media miss a crucial hand gesture in the initial flurry of votes?

None of this was what the Capitol Hill media – or major customers like the stock markets – are used to:

“We were very disappointed that Wednesday’s change in Senate voting protocol kept us from giving the public real time access to this key vote,” said Terry Murphy, C-SPAN’s vice president of programming. “The tactic certainly gives the concept of legislative transparency a black eye.” Afterward, there was confusion. Initially, a spokesman for Majority Leader Harry Reid, the Nevada Democrat who runs the Senate, said Reid was unaware at the time that Senate procedures were being bypassed. Later, spokesman Adam Jentleson said Reid “consented to Republicans’ request.”

“We are extremely concerned with the way the vote tally was handled yesterday on a pivotal debt-ceiling vote,” said Siobhan Hughes, chairwoman of the Standing Committee of Correspondents, which represents the interests of Capitol Hill’s print media. “When the vote tallies are not read aloud, it makes it harder for the media and therefore the public to get the information they need to hold lawmakers accountable.”

Indeed.  It’s one thing for conservative pundits and political strategists to sell the argument that the debt-ceiling vote wasn’t the place to take a stand.  But it’s another thing entirely for the politicians involved to try hide from the consequences of acting on that argument.  If it’s the right thing to do, then man up and be accountable for it.  If your deeds have to be shrouded in secrecy, the problem isn’t the voters.

The pusillanimous approach of a handful of Senate Republicans isn’t, moreover, the end of the story.  This could all happen again:

“After the vote began, it was quickly clear that Republican leaders were struggling to deliver enough votes … and a potentially catastrophic default suddenly seemed possible,” Jentleson said. “At Senate Republicans’ request, the clerk did not call the names during the vote to make it easier for Republican leaders to convince their members to switch their votes.”

Here’s the principle, in other words: it would be so catastrophic to not increase the debt ceiling that Senators must have the option of avoiding the people’s scrutiny.

At some point, we have to start calling this what it is.  When Senators are trying desperately to hide what they’re doing from the people, they aren’t exercising strategy.  They’re fleeing responsibility.  Ted Cruz was right to call that out.  Darkness cannot be the better path.

It certainly is not a “strategy” for achieving a positive, forward-moving objective.  The evidence of that is all around us.

But apart from the evidence of outcomes, we can say this on principle: if managing government seems to demand hiding your actions from the people, you’re doing it wrong.  Perhaps nothing shows so clearly how our current crop of leaders have painted themselves – and us – into a corner as this sad attempt at secrecy by Senate Republicans.  The people are not the ones who are stupid here. We’re not the ones who “don’t understand.”

Watch Usain Bolt during U.S. National Anthem
Next Post
Video: MSNBC asks ‘What would Jesus do?’ about Obamacare 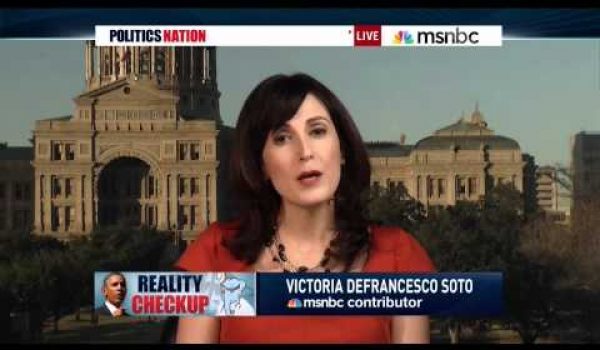