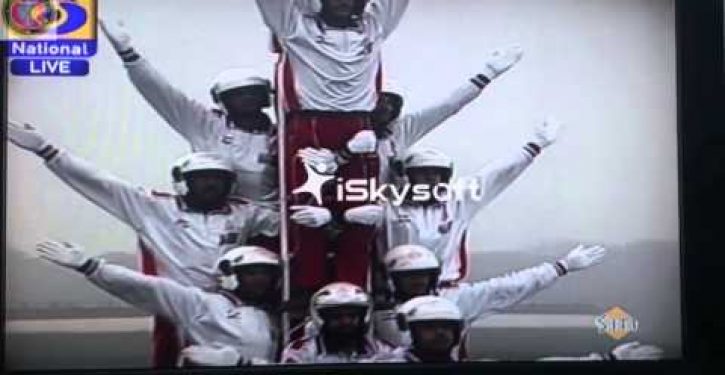 To answer your first question: no, the U.S. Army does not have a motorcycle stunt team.  Very few armies do; the Brits have the Royal Signals Motorcycle Display Team, but the whole idea has never really caught on around the globe.

The Indian army’s stunt team has become known for breaking records by cramming people on bikes.  It’s also a nice calling card when India is seeking military cooperation in places where China might get her nose out of joint, like Mongolia.

The visual that went with the Indian army team packing a world-record 54 guys on a Royal Enfield Bullet was kind of underwhelming.

But this video of the motorcycle stunt team in the 2014 Army Day parade is a more interesting slice of Indian culture.  The stunt riders do perform more active, acrobatic stunts than what you’ll see here.  But the poses in the video evoke iconic images of design and balance from India’s cultural legacy.

Hang with it; the first 20 seconds are slow, but it gets better.