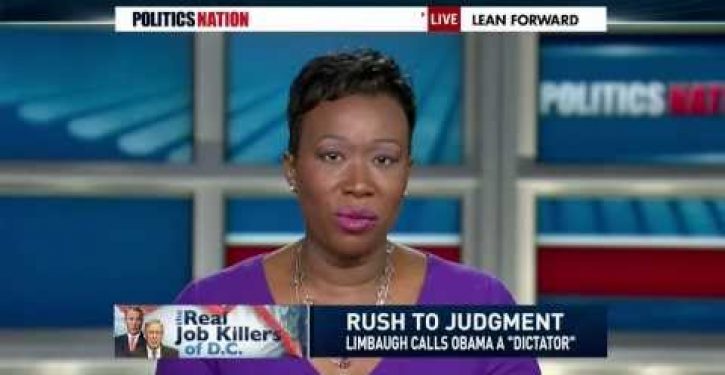 In addition to which, does this woman really believe that Republicans want their own country to crash and burn as long as the president goes down in flames himself?

During a conversation with Jared Bernstein and Joy Reid, Al Sharpton asked the duo what they thought about Republicans talk of jobs being the biggest issue for the 2014 midterm elections.

It was at this point that Reid declared:

I mean the Republican Party really is governed by its media industrial complex at this point. The media wing really drives the policy… Their base is married to the idea that Barack Obama is this dictator, that President Obama is the worst thing in the world and they in a sense have an incentive to make the country fail if necessary just so he’ll fail!

Apart from the sheer absurdity of the claim, Reid seems oblivious to the fact that that it’s not just the president’s enemies on the right who see him as an abject failure. In September, longtime Obama cheerleader Joe Klein wrote of Obama’s backing away from his red line on Syria:

[H]e has damaged his presidency and weakened the nation’s standing in the world. It has been one of the more stunning and inexplicable displays of presidential incompetence that I’ve ever witnessed.

His having been caught lying to the American people about Obamacare also caused the scales to fall from the eyes of previous supporters. Even before that revelation, in September 2013 a Gallup poll showed that his approval ratings among Democrats had slipped near his all-time low up to that point.

Critic slammed after calling ‘Lone Survivor’ a ‘jingoistic snuff film’
Next Post
Expert: Hackers can use Obamacare website to take over your computer