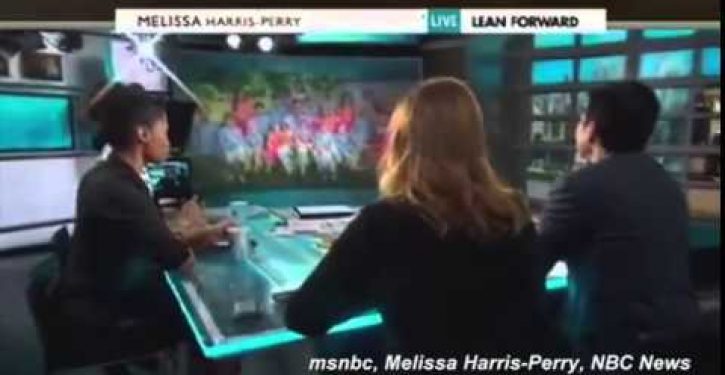 Melissa Harris-Perry is sorry — boy is she sorry (as in “one sorry specimen”). Harris-Perry is one of several unfunny jokes that cable network MSNBC keeps on hand for its four or five viewers. (It’s hard to remember at this point what the network’s audience share is down to.)

Judging from her apology today — which is all over the place and, thus, nowhere — Harris-Perry’s latest offense makes as little sense to her in retrospect as it did to anybody with an IQ in triple digits who happened to see the now-viral video shown below.

Caleb Howe, writing at the Right Scoop, has the details:

On MSNBC’s Melissa Harris-Perry on Sunday, the panel was discussing several topics of the ‘of the year’ variety. In the below clip, panelists are shown photos ‘of the year’ and asked to offer humorous captions. Host Harris-Perry shows a Romney family photo that includes his adopted grandchild, who happens to be black….

The panelists start laughing the moment the photo [below] is on the screen….

Then the first response is Pia Glenn off-camera sing-songing ‘one of these things is not like the others, one of these things just isn’t the same’ and the rest of the panel chuckles along. It’s funny because Romney is white and his grandson isn’t, which is obviously hilarious. Because as everyone knows, the races should not mix.

But it’s even better than just hilarious, it also makes you think! Because, as the final comment from the panel tells us, this pic is a microcosm of the GOP. ‘It sums up the diversity of the Republican party and the RNC, where they have the whole convention and they find the one black person.’

The irony of Harris-Perry’s condescending views, as she hints at today in her meandering apology (which is delivered as five disjointed and illogical tweets), is that she has little room to criticize Romney, coming herself from a family that is largely white and Mormon. Her desire for forgiveness seems more rooted in her concern over her job at MSNBC than it does in sincerity, but if she is really in earnest, this apology marks just the beginning for her. She has uttered many dimwitted and mean-spritied comments in her role as a media personality.

2013: The year in white grievance
Next Post
New York Times’ David Kirkpatrick: We had a reporter on the ground during Benghazi attack