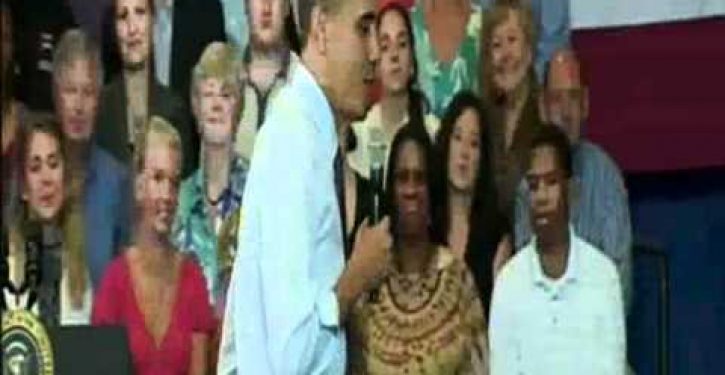 If you’re going to run your presidency by executive fiat rather than by following the rules set down in the Constitution, you had damn well better remember your own power grabs. This lesson sadly was lost on the current leader of the free world, who has found more creative ways to bypass Congress than any than any president before him.

When a heckler at an immigration rally in San Francisco on Monday shouted, “You have the power to stop all deportations!” a crestfallen Obama replied, “Actually, I don’t.” He went on to lament that he lacks the power of the legislative pen, which has been an ongoing personal (and actual) struggle throughout his presidency, as is reflected in this video:

This time he was right for a change: He doesn’t have the authority to halt deportations. He didn’t have it either in 2011 when he enacted a de facto amnesty for 300,000 illegal immigrants who were facing possible deportation.

Seemingly to provide cover, Obama didn’t write an executive order that immigrations be stopped. Instead he drafted a memo to Homeland Security Secretary Janet Napolitano, who issued the order on his behalf. It still amounted to another executive power grab. Kenneth Mayer, a political science professor at the University of Wisconsin told The Hill in 2013 that Napolitano “was acting as an instrument of the president” on this occasion.

Congress, at the time, was visibly upset. Republican Sen. Chuck Grassley called the move “an affront to the process of representative government,” adding, “he’s circumventing Congress with a directive he may not have the authority to execute.”

He has done it to push his own policy agenda time and again, and on a variety of issues. In January 2013, following the Newtown massacre, he signed 23 executive orders dealing with gun control in one fell swoop, thereby setting a record.

His position on the use of executive privilege — which was the quite different before he ascended to the White House throne — is well documented in other YouTube videos, one of which follows:

One final perverse chuckle for the day comes from a statement Obama made with a straight face on Sunday, when he told members of the press in Seattle that he is “not a particularly ideological person.”