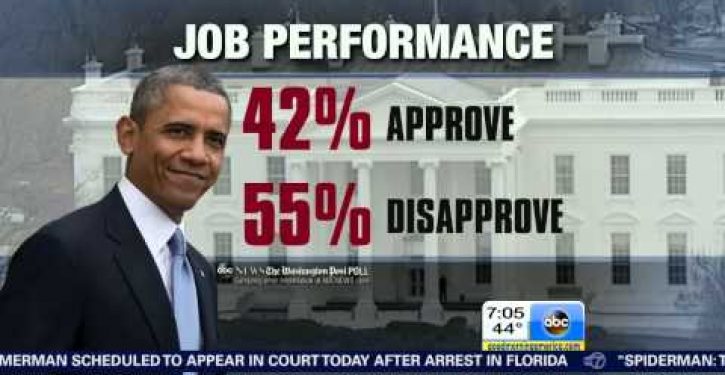 The buyers’ remorse felt by Americans who once supported the Affordable Care Act has metastasized. That’s the takeaway from a new ABC News/Washington Post poll, which reveals that if voters could take a mulligan on the 2012 election, they would choose Republican candidate Mitt Romney over Barack Obama by a margin of 49% to 45%.

Other findings of the poll include the view, now held by 45% of Americans, that Obama is “too liberal.” Forty-six percent say the same is true of the Democratic Party as whole.

Obama’s approval rating also hit a new low in the poll, with 42% saying they approve of the job he’s doing while 55% disapprove. ABC’s George Stephanopoulos addressed the results of the poll on his morning program with Chief White House Correspondent Jonathan Karl. A video and transcript follow.

GEORGE STEPHANOPOULOS: Our new ABC News/Washington Post poll, which shows President Obama with the lowest support of his presidency. Those troubles with Obamacare hitting hard across the board. Seven out of ten Americans now think the country’s on the wrong track, and this comes amid new revelations that the administration was warned about the problems in the website as early as March. ABC’s Jon Karl is at the White House, and Jon, these are brutal numbers for the White House.

JONATHAN KARL: They sure are, George. The lowest job approval rating we have ever seen in the ABC News/Washington Post poll. Only 42 percent approving of the president’s job performance, 55 percent disapproving, and on the health care law, a record-high 57 percent say they oppose the law. Only 40 percent supporting it. George, look at this number. We asked voters if they could have a mulligan on the 2012 presidential election, who would they vote for. A plurality now say they would vote for Romney over Obama. But of course, that is one thing that President Obama does not have to worry about.

STEPHANOPOULOS: What a difference a year makes. Real signs that there were some red flashing lights back in March about the rollout of the website.

KARL: That’s right. It turns out we learned from the congressional committees investigating this that they asked a consulting firm to look at whether or not they would be ready, the McKinsey consulting firm. They found in a March report that was presented to White House officials in April that there were real problems. They thought the website would not be ready. Their biggest concern, George, was there was not enough time to do end-to-end testing, and of course we know that was exactly the case.