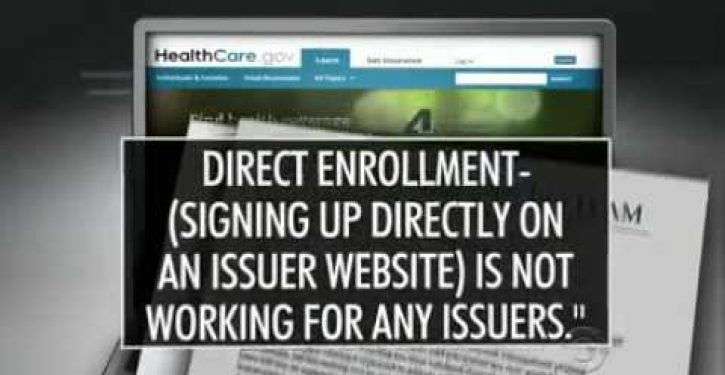 Have the mainstream media found their collective conscience and begun at last to vet the most transparent administration in history? It’s too early to make that assessment, but suffice it to say that two of the big three networks have in recent days come down with a serious case of truth telling.

First, NBC News reported that the president did indeed “prevaricate” when he repeatedly assured Americans that they would be able to keep their health care plans come hell or high water.

Now CBS news has upped the ante and actually done some investigative journalism. The network has uncovered an internal memo written by the Centers for Medicare & Medicaid Services (h/t Weasel Zippers) which reveals not only that the administration lied again when it claimed early on to have no information on enrollment figures but that the White House has systematically fudged the stats it has shared throughout the month of October.

Early enrollment figures are contained in notes from twice-a-day ‘war room’ meetings convened within the Centers for Medicare and Medicaid Services after the website failed on Oct. 1. They were turned over in response to a document request from the House Oversight Committee.

The website launched on a Tuesday. Publicly, the government said there were 4.7 million unique visits in the first 24 hours. But at a meeting Wednesday morning, the war room notes say ‘six enrollments have occurred so far.’

The notes leave no doubt that some enrollment figures, which the administration has chosen to keep secret, are available.

‘Statistics coming in,’ said notes from the very first meeting the morning of Oct. 2. Contractor ‘QSSI has a daily dashboard created every night.’

But head of CMS Marilyn Tavenner would not disclose any figures when Rep. Dave Camp, chair of the House Ways and Means Committee, asked earlier this week.

‘Chairman Camp, we will have those numbers available in mid-November,’ she said.

Health and Human Services told CBS News Thursday it’s in no position to confirm or discuss enrollment figures because it doesn’t have any. A spokesman suggested the numbers obtained by CBS News may not include all the different ways to enroll, such as paper applications. The spokesman also said that enrollment figures in Massachusetts’ health care plan started off negligible but then skyrocketed as a deadline neared. [Emphases added]

This revelation comes on the same day that a lesser story by the Associated Press notes that the administration keeps photojournalists at arm’s length, instead handing out staged pictures of the president, which amount to little more than propaganda.

Are the MSM ready to connect the dots?