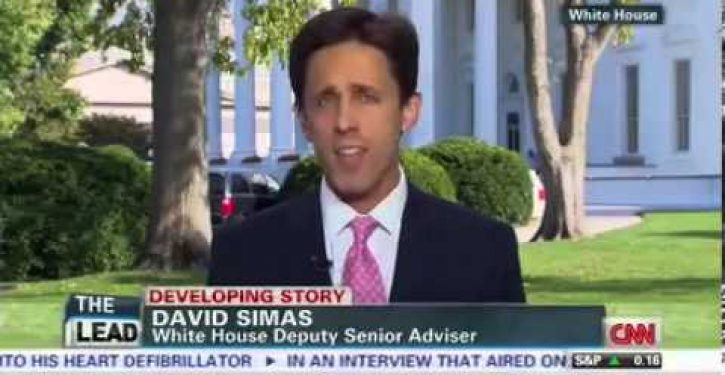 Yesterday, following the president’s silly Rose Garden infomercial for Obamacare, White House spokesmen were grilled on the timetable for the next steps in the health care rollout and on what the American public can expect if dates are missed. One flashpoint that arose in these exchanges was whether the non-compliance “penalty” would be assessed on people who failed to buy insurance if Healthcare.gov was still dysfunctional.

Jay Carney could not have been clearer when he said, “If you do not have access to affordable health insurance, then you will not be — being asked to pay a penalty because you haven’t purchased affordable health insurance.” (When I say Carney could not have been clearer, I didn’t mean that his statement was clear — it was hopelessly muddled — but, rather, that that’s about as coherent as the battle-wearied press secretary gets these days.)

White House mouthpiece David Simas didn’t fare much better with the question. Here is a video clip of his exchange with CNN’s Jake Tapper. The transcript follows.

TAPPER: We obviously want people to get health insurance, and we obviously want people to do this so they don’t have to pay the fine. I let you do what President Obama did earlier and give the public service announcement about other ways, but you didn’t answer my question: Will the website be up and running, can you promise, by December 15th, or by the March deadline, either one of the dates? Yes or no? can you promise?

SIMAS: So Jake, yes, between the website and all of the other ways that people have to sign up –

TAPPER: That wasn’t really the question.

SIMAS: But here’s the reality. Any American over the course of the next six months who either doesn’t have insurance or is on the individual market, between the website service that prior to October 1st didn’t exist, a 1-800 number prior to October 1st that didn’t exist, navigators and the ability to do it on their own, they can get insurance and will.…The main purpose of the Affordable Care Act is not a website. It’s to make sure that any American who is either uninsured or in the individual market has options to get insurance. That will happen. That’s our sole focus and that’s what we’re going to do.

In the end, Simas didn’t have an answer either. So let me take a crack at it. Those who don’t buy insurance won’t have to pay the penalty on Jan. 1 or March 15 — or ever. As Keith Speights of The Motley Fool explains, the Affordable Care Act includes no provision whereby the IRS can enforce collection of the penalties.

There are mechanisms by which the tax agency can collect the nuisance tax — for example, by subtracting the monies from a refund or through taxes withheld by an employer. Beyond that:

[It] can’t press criminal charges or assess further financial penalties for not paying. The IRS also can’t place a lien on property as it can when seeking payment of overdue taxes.

This loophole is a further inducement to young Americans, on whose participation the financial well-being of the health care depends, to avoid signing up.