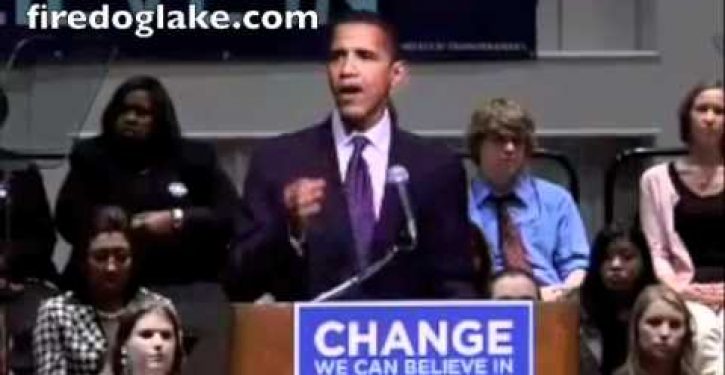 Speaking before a partisan crowd in suburban Washington, DC, the left-of-center news portal Think Progress reported on Oct. 3, 2013 that Obama “tore into Republicans” over the furloughing of non-essential federal workers. However, the intended insulting comparison Obama hurled at the GOP was actually a textbook example of a union strike.

Speaking to an audience numbering in the high dozens (click here for video) at the M. Luis Construction Company of Rockville, Maryland, Barack Obama attempted to shame the Republicans in the House of Representatives into agreeing to fund the Affordable Care Act, popularly known as ObamaCare.

Yet the same Barack Obama vowed unequivocally while campaigning for the Presidency in Spartanburg, SC. on Nov. 3rd, 2007 (click here for video):

If American workers are being denied their right to organize and collectively bargain when I’m in the White House, I’ll put on a comfortable pair of shoes myself, I’ll will walk on that picket line with you as President of the United States of America.

Because workers deserve to know that somebody is standing in their corner!

Possibly without realizing it, during his very public finger wagging at the errant House Republicans, the Chief Executive gave a prime example of workers organizing and using one of the most effective tools in collective bargaining – a strike.

Because the deal is you’ve already gotten hired. You’ve got a job. You’re getting a paycheck.

And, so, you also are getting the pride of doing a good job, and contributing to a business, and looking out for your fellow workers. That’s what you’re getting.

It shouldn’t be any different for a member of Congress.

Who’s whose hostage? (Update)
Next Post
Letters to True Believers