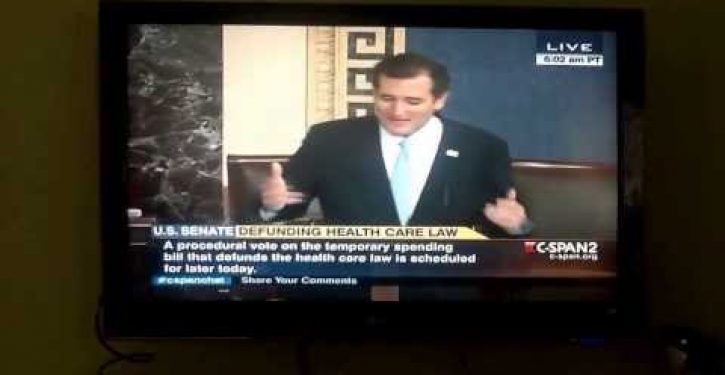 It’s not a filibuster in the true sense of the word, critics harrumph.  Even commentators on the right acknowledge that filibusters have been used historically to block or delay a vote. But the Senate vote on the House spending bill will go forward today, and if anything Cruz supports the measure, which excludes spending for Obamacare.

It’s a fool’s errand, some maintain, pointing out the obvious: that when all is said and done, the Senator from Texas doesn’t have enough votes to carry the House bill. They say the talk-a-thon, which is in its  20th hour, is good for Cruz personally, in that it raises his national profile and rallies support among the small-government, Tea Party faction of a divided Republican party. Some argue it is valuable press for a Cruz White House run in 2016.

It does make for great political theater. But ultimately Cruz’s stand is more than that. This morning, he read a passage from Ayn Rand that is applicable not only to the debate that divides the legislature but the nation. It shows where the similarities between a man like Cruz and a man like Barack Obama end.

Obama claims that Cruz and his Tea Party backers are unwilling to negotiate. He is using the wrong verb. Cruz is unwilling to compromise, and it is on a view that most Americans hold with respect to the Affordable Care Act.