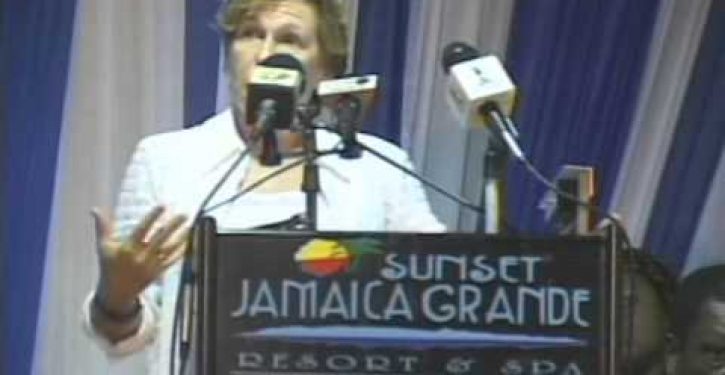 American Federation of Teachers president Randi Weingarten delivered the keynote speech last Monday at the annual conference of the Jamaica Teachers Association, held at the Sunset Jamaica Grande resort in Ocho Rios. She used the occasion to draw parallels between AFT’s situation and that of the JTA.

“I call them ‘austerity-mongers’,” Weingarten said. “They say that education is really important, but then, when we say that family poverty makes a difference, they say that’s an excuse.”

Weingarten chose an unfortunate time and place to go after the heartless money-grubbers. The biggest issue currently facing the 24,000-member Jamaica Teachers Association is the disappearance and apparent embezzlement of at least $52 million from its accounts.

The teacher delegates were further dismayed when it was revealed that the extent of the fraud could, in fact, reach $112 million, as the auditor’s report showed that amount in difference between it and the organisation’s financial statements.

According to the JTA financial statements, the organisation made a surplus of $72 million for the period. However, the auditor’s report reflected a deficit of $40 million.

“How come we don’t hear of anybody being fired or anybody resigning?” one delegate questioned. Another suggested that persons be jailed for the fraud.

That’s a possible theft of $4,667 per member. Four employees of the union’s account department were placed on paid leave during the investigation, with one person of interest, Marlon Francis, still at-large. He is being sought by the Fraud Squad.

It’s not known whether Weingarten offered any advice to JTA from her wealth of experience on how to deal with union fraud, but JTA seems to have learned American communications strategy pretty well. There is no mention of the missing funds on JTA’s web site.

N.B. All numbers referenced above are in Jamaican dollars. The possible fraud totals about $1.1 million U.S.