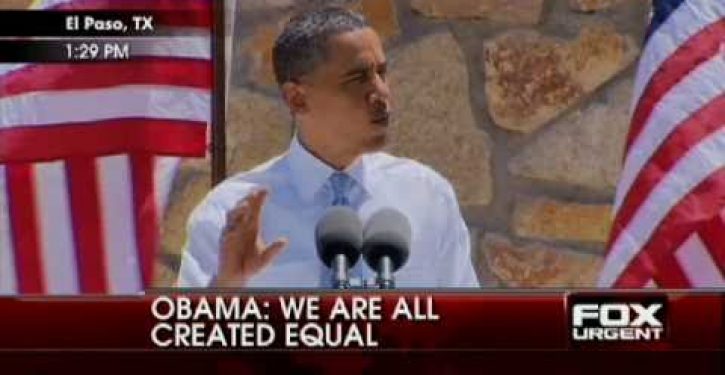 Have you ever wondered what exactly Organizing for Action, Barack Obama’s dark money group, does? Much of its energies are focused on soliciting donations, which is the one (perhaps only) area in which Obama excels, along with campaigning.

According to Wikipedia, OFA “advocates for the agenda of U.S. President Barack Obama” — an end it accomplishes in part by sending out gag gifts to lawmakers who don’t share Obama’s views.

To spearhead “Action August” (which sounds strikingly and distressingly similar to “Recovery Summer”), the group has taken to sending trophies to 135 members of Congress who are “climate deniers” (which presumably means they deny the existence of climate). Each trophy features a statuette of a unicorn, rearing up on its hind legs, mounted on a pedestal with an engraved message.

Climate change deniers have said some ridiculous things in the past, making excuses for why they don’t believe in climate change that would be funny if the issue wasn’t so serious.

To call out elected officials who have decided to turn their back on hard scientific evidence, OFA volunteers have already been tweeting at their members of Congress this week, telling them that #ScienceSaysSo on climate change reality. Now they’re taking it to the next level, serving ridiculousness for ridiculousness.

At least he admits the trophies are ridiculous.

One of the tweets sent out to mock naysayers came from the Twitter account of Barack Obama himself. This is his message:

Science says a lot of things. As Obama’s initial two anecdotal examples reveal, scientific hypotheses are subject to change. His intimation that it is foolish to cling stubbornly to past beliefs when the evidence proves otherwise is on point. So what is the most current “consensus” on climate change?

By way of an answer, let’s examine a report released in early July. The team that prepared the report examined hard data over the past 100 years. To their surprise, they found no steady increase in major storms such as hurricanes. The Mid-Atlantic River Forecast Center of the National Oceanic and Atmospheric Administration recorded seven floods in 2012, but that was exactly the number reported in 1912, a century earlier. The report also determined that U.S. greenhouse gas emissions have been declining since 2007 and fell by 1.6% between 2010 and 2011.

Ditto for global temperatures, which plateaued in 2003. Many in the scientific community had predicted that temperatures would continue to rise. Why they didn’t is hard to explain.

So what group of astrologists published this blasphemy? It was Obama’s own Department of Energy.

But let’s put aside the issue of climate change and focus instead on the president’s “style” in this humorous episode. His tone and actions are typical of his approach since before his first election to the presidency in 2008. B.O.’s M.O. is to hector and belittle those who disagree with him: to hold them up to ridicule. Instead of attempting win the hearts and minds of the “opposition party,” he has sought to win fights against them (think of the number of times he has spoken of fights he is “willing to have”). And his favorite weapon in these skirmishes has been his sharp tongue.

To illustrate, take the example of a speech he delivered in El Paso in May 2011 on the topic of border security. The money part of the video begins at around 2:50. The transcript follows:

We have gone above and beyond what was requested by the very Republicans who said they supported broader [immigration] reform as long as we got serious about enforcement…. But even though we’ve answered these concerns, I suspect there are some who will try to move the goalposts on us — again. They said we needed to triple the border patrol. Now they’ll say we need to quadruple the border patrol. Or they’ll want a higher fence. Maybe they’ll need a moat. Maybe they’ll want alligators in the moat.

His acerbic wit (if you want to give him credit for being witty) has been a stumbling block to his own effectiveness. Even writers on the left have acknowledged as much. Here is a warning that Slate’s John Dickerson issued in September 2008:

The base loves the sarcasm. But sarcasm is dangerous. It’s more corrosive than nonsarcastic political humor, which sometimes can make even your opponents laugh. (Think of Ronald Reagan, who said he was going to dress up as Mondale’s economic plan for Halloween.) As Peggy Noonan has written, humor delivered well entices voters, brings you on par with your opponent, and ‘gets people to carry your message for you’ as they retell your joke.

Sarcasm is meaner. It gets your team fired up, but it also fires up the other side.

Obama will tell you that Republicans in Congress have been obstinate and oppositional. In point of fact, they have been nothing more and nothing less than the enemy he branded them as early on. But he has no one to blame for this than the man scowling back at him from his reflection in the mirror.

No wonder OFA, which was made in his own image, follows his lead.