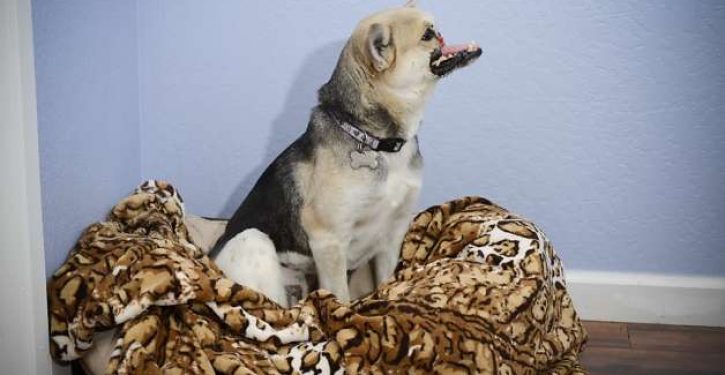 If you are one of those people who can’t get their fill of feel-good stories around the holidays, be prepared to shed another tear of joy over the happy news received on Christmas Eve by a Filipino family and its loyal pup.

The San Francisco Chronicle reports (h/t The Blaze) that the prognosis is positive for a heroic dog that developed cancer. The dog, named Kabang, lost her snout and upper jaw when she jumped in front of a speeding motorcycle in an effort to save her owner’s daughter and niece from serious injury or death.

Kabang’s selflessness and courage made her into something of an international canine folk hero after the story was picked up from a newspaper in the Philippines. But the dog made the headlines again in early December when it was revealed that she had contracted cancer.

One of the readers was a nurse from Buffalo, N.Y., who spearheaded a fundraising campaign to bring the sick pooch to the U.S., where state-of-the-art veterinary medicine has given her a new lease on life. After six weekly intravenous chemotherapy infusions, Kabang’s disease is in remission, reports Dr. Gina Davis, of the William R. Pritchard Veterinary Medical Teaching Hospital at the University of California, Davis.

Kabang will still need surgery for the gaping wound on her face. And prior to that she will need to be treated for heartworms in her arteries. “It will be one to two months for her to recover from that before she goes in and has the surgery,” Davis told reporters.

Surgeons are planning to perform two or three procedures. The first will involve dental work, extractions, and covering exposed roots. They will then make an effort to close the dog’s wound and restore nasal functions. The dog’s bony structures are currently exposed to air, increasing the possibility of infection.

Despite Kabang’s many ordeals, she is described as a “happy little dog, very friendly.” Adds Davis:

She wags her tail a lot and has become very attached to my veterinary technician, Lisa Sullivan. Overall we are very happy with how she is doing. She has come through everything very well. Her appetite is still good. She’s still bright and happy.