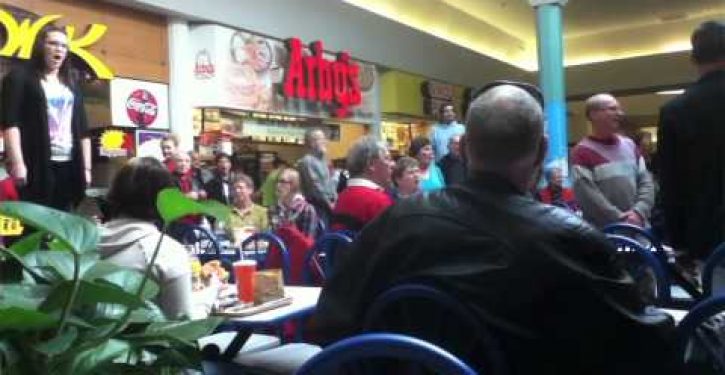 With over 40 million views, the video below captures the essence of the article you are about to read.

A funny thing happened “on the way” as I was contemplating writing this piece. While listening to a Christian radio station, I heard the announcer say, “Jesus is the reason for the season.”

At that moment this very familiar phrase hit me like a thunderbolt. For not only is “Jesus the reason for the season,” but Jesus is the reason our world, nation, history, culture and society are the way they are.

So regardless of whether you believe in Jesus, practice another faith, or are devoid of faith, Jesus has impacted you by virtue of the fact that you are alive.

For no person has affected mankind – past, present and future –more than this Jewish teacher who lived over 2000 years ago, whose birth we will celebrate with great fanfare.

Although Jesus’ life, death and resurrection were the impetus behind His followers’ establishing Christianity, the world’s largest religion itself is only the starting point for the influence Jesus spawned in countless non-religious venues as people over the centuries were moved and motivated by Him to express themselves in a multitude of ways that we continue to see played out everyday across the planet.

With so many examples of Jesus Christ’s effect on mankind it is impossible to even mention them all in this short piece — the purpose of which is to not only enhance your celebration of “the reason for the season” but to also increase your awareness of just how much Jesus impacts the world around you every day of the year.

If after reading this piece you are moved to delve deeper into this topic, I recommend a book published in 1994 that has since become a “modern classic,” What If Jesus Had Never Been Born?, co-authored by the late Dr. D. James Kennedy and the still very much alive Jerry Newcombe.

This book had a profound influence on me as it oriented my thinking about Jesus in ways that I had never contemplated.

So here in alphabetical order is only a short, incomplete list of the most obvious “non-religious” aspects of how Jesus Christ has impacted the world.

The great cathedrals of Europe are glorious triumphs that epitomized the evolution of the art and science of architecture and the associated field of engineering. When we gaze on these marvelous edifices today we stand in awe and wonder just how these massive monuments to Jesus, still standing centuries later, were built.

The architectural style most associated with Christianity is Gothic dating from 12th century France.

It is impossible to visit any famous art museum and not see masterpieces reflecting the life of Jesus or the aftermath of his walk on earth. Of course among the world’s most influential paintings is The Last Supper by Leonardo da Vinci, painted on a monastery wall in Milan, Italy, and depicting the Passover Seder that changed the world.

Look around any community and you will see the Salvation Army at work along with countless soup kitchens, thrift shops, homeless shelters, rehab centers, orphanages, houses for abused women, etc. all run by local churches or Christian/Catholic faith based organizations. Jesus taught his followers to have compassion toward those at the bottom rung of the social ladder and the church over centuries has embraced this concept in earnest. Mother Teresa who died in 1997, has become an iconic example of Christ’s teaching in action.

This area of Catholic/Christian influence is among the most impressive worldwide. In our nation during its first 200 years all children’s public school textbooks emphasized biblical literacy. Now the Catholic school system in our nation is still large, influential and as of late has become a popular alternative to “liberal” public schools for Catholic as well as many non-Catholic families.

It is easy to forget now, since most colleges are associated with liberal/secular teaching, that in Colonial America all but one of the 123 colleges were founded as Christian institutions. Most notable was Harvard University which began in 1636 and was named for its founder and first funder Reverend John Harvard. Among other well known early colleges with religious roots were Yale and William & Mary.

Social movements that have changed our nation and the world can be traced back to the Christian concept that all human life is worthy and precious. For example, slavery was ended in good measure through the leadership of Christian activists. The civil rights movement was spearheaded by Christian leaders such as Dr. Martin Luther King, Jr.  The women’s movement has it roots in how Jesus valued and treated the women around Him. The rise of Christianity can be traced to the ending of infanticide, cannibalism and even gladiator fights.

Next time you see a hospital bearing a Christian/Catholic name keep in mind that Christians have been leaders in medicine and the building of hospitals. This effort was influenced by Jesus who healed the sick during his earthly ministry, as well as his early followers who often risked their own lives and health to care for plague and other disease victims abandoned by society.

This is just a small modern example of Jesus’ influence at work in our culture that most people would not connect to Him. The drugstore chain CVS has for 34 years funded an ongoing program called “CVS/Samaritan” providing free roadside assistance in nine major markets. The first time I ever saw one of these vans with “CVS/Samaritan” emblazoned on the side in huge red letters was on the famous (or infamous) Washington D.C. beltway. Since Bible literacy is at an all-time low, upon seeing the van, I wondered if most people still associate the name of this free service with Jesus’ famous parable of the Good Samaritan found in Luke 10:30-37 . Even more revealing was how in 2008 this article celebrating 30 years of “CVS Samaritan” makes no mention of the Bible story from which this free service derives its name.

Writers such as Dante, Chaucer, Dostoevsky, Shakespeare, and Dickens were all Christians and their writing was influenced by their faith. Connected to literature is the printing press, the most transformational technology of its time. It was invented by Johannes Gutenberg in 1440 and the first book he printed was the Gutenberg Bible.

Imagine Christmas without Handel’s Messiah, so beloved it is celebrated even by “flash mobs” as seen in the opening video. Then there is Bach who signed all his work Soli Deo Gloria (“Solely to the glory of God.”) Church hymns also have had an enormous impact on music. Most amusing is when I read about a rock star like Katy Perry, a pastor’s daughter, who got her start singing in church. Even the words to many of our familiar patriotic national songs read like prayers and are included in many church hymnals.

This list could go on and on for there are volumes to be written about how “Jesus is the reason for this season” and every day of the year despite our modern day culture’s attempt to push Him aside. But as I have previously written, Christianity may be on the wane in our nation and Europe but it is surging in Africa, South America, India, and across Asia, especially in China.

Yes, the world’s largest religion is garnering more converts every day and its past and present influence on government, capitalism, law, politics, holidays, history, the calendar, our moral compass and the time line of B.C. and A.D  just to name a few more, continues to impact those who are not followers of the faith.

But for those who are, Merry Christ’s Mass to you!